One veteran uses his experiences to connect with the next generation

Posted on December 19, 2012 | Comments Off on One veteran uses his experiences to connect with the next generation

Brian, a former Marine Corps corporal who served two deployments in Iraq, had been invited to Reynolds High School in Troutdale, just east of Portland. The school was hosting a Living History Day, a day devoted to recognizing area veterans and inviting them to share their stories with the student body.

All our modern wars were represented: WWII, Korea, Vietnam — each veteran sharing their story with the students. Brian, at 30 years old this month, took his place that day as a representative of our new generation of veterans from the wars in Iraq and Afghanistan, his two tours to the Middle East earning him his seat.

In front of a class of about 15 students, Brian had at his flank three survivors of the war in Vietnam. And after one told his story of being at sea aboard the USS Oriskany the day a fire killed 44 of his shipmates in 1966, it was Brian’s turn to share his story. 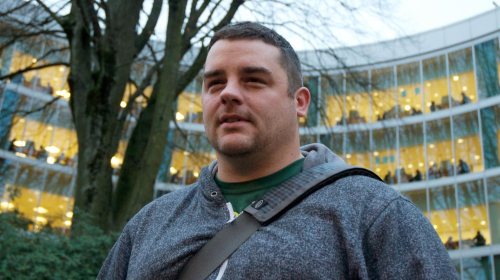 He had joined the Marine Corps in mid-2001 and was in boot camp on 9/11. Trained as a combat engineer, he deployed to Kuwait in 2003 and his unit was among those to breach the Iraqi border for the invasion forces that March. END_OF_DOCUMENT_TOKEN_TO_BE_REPLACED

It’s Wednesday morning at the Clark County courthouse in Vancouver, Wash., and Navy veteran Eric Vance stands before the district court judge. Appearing in the middle of the day’s hurried docket, Vance requests that two bench warrants stemming from a DUII charge be quashed in exchange for his application to the county’s veterans treatment court.

Down the hall, retired Army command sergeant major Norm Hayes is finishing his monthly check-in with the veterans court. There is nothing hurried in this courtroom. Along with a dozen or so other veterans, Hayes appears before the judge to talk about how treatment is going. The meetings are going well. He even went on a weekend trip recently. When Hayes is finished, the judge — who greets each of the court’s participants by first name — steps down from behind his bench to present Hayes with a court mug as the room fills with applause. END_OF_DOCUMENT_TOKEN_TO_BE_REPLACED

Leading his community service crew through the heart of downtown Portland, crew-leader Wayne Baseden doesn’t so much as slow his stride when he poses a question to the group.

“Which country lies furthest north on the continent of Africa?” Baseden asks. “Is it Tunisia, Sudan, Madagascar or Nigeria?

One of the 12 members of the crew, each wearing a fluorescent yellow reflective vest branded with “Community Court Crew” on the back, hesitantly guesses Sudan. END_OF_DOCUMENT_TOKEN_TO_BE_REPLACED

Life after war through photography

It took 60 years for local photographer Jim Lommasson’s father to share his stories from combat in World War II, and now the son is working to ensure that veterans of Iraq and Afghanistan do not wait to share their experiences with war.
Lommasson — a photographer, oral historian and author — is leading a public discussion on April 25 about veterans’ combat experiences as part of the Oregon Humanities’ Conversation Project.

Christopher Arendt is a former Guantanamo Guard. "People look at the NAZI concentration camps and wonder, how can you do something like that? It's really easy. It's a simple thing. You make one wrong decision and you spend the rest of your life explaining that decision. I've barely made any choices in my life, and then I ended working in a concentration camp."