Posted on December 18, 2012 | Comments Off on Vendor profile: Making a pitch for new beginnings 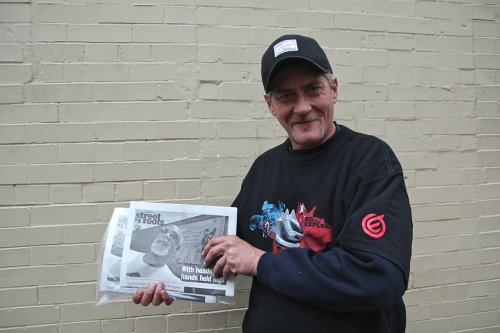 Darryl Goeas, 48, is homeless for the first time in his life.

In August, he moved from Reno, his home for 13 years, looking for work. When a job fell through, he was left in Portland’s city center, not knowing where to sleep or how to stay safe. He was alone for two days before he met “Raider” Dave. Goeas told him that he didn’t have a place to sleep, and Dave took him back to his own spot next to the Wonder Ballroom. He met people there who he become friends with, and now considers family.

Staff from nearby restaurants and people from nearby churches share food. The security guards from the Wonder Ballroom keep an eye out for Goeas, Raider Dave and their friends. It’s been a challenge to sleep on the streets, but manageable because of the supportive community.

“There was a shooting a couple nights ago outside the Wonder Ballroom, and if I had been there by myself I probably wouldn’t have had the gonads to stay there,” Goeas said.

It’s been tough in Portland, because of the rain, and the newness of being homeless. But it has been good too.

They had only been friends briefly before Dave suggested Goeas start with Street Roots.

“Raider Dave took me under his wing,” Goeas said. “While I was canning, and doing little side jobs, Dave took me aside and said, ‘You got to try Street Roots.’”

Goeas said Dave noticed he was a good talker and good with people.

And now Goeas chats with new people every day.

He said he likes to see people light up when he speaks to them.

Goeas has come to love Portland so much that he turned down opportunities to move back to Reno. He appreciates the weirdness of the city, even though he says he tends to look pretty normal in comparison.

“I just seem to click with other people here. They don’t care where I’m from, or what I look like,” he said. I’ve traveled all over the world and never people like here. Nowhere else in the world do you have people who treat you like that when you’re hard-timing.”

Goeas spends about four hours a day selling papers for Street Roots. That gives him income and time to devote to looking for jobs.

“I’d really like to get off the streets, clean up and get into sales,” he said.

But for now, he enjoys volunteering with churches and people who spend their time and energy helping the homeless.

“There’s something about doing something for others when you’re hard-timing it,” Goeas said. “You’ve got to give back. That’s what Portland is all about, isn’t it? Just because you’re homeless doesn’t mean you can’t help out.