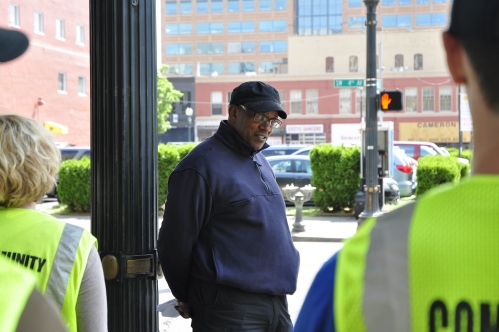 Leading his community service crew through the heart of downtown Portland, crew-leader Wayne Baseden doesn’t so much as slow his stride when he poses a question to the group.

“Which country lies furthest north on the continent of Africa?” Baseden asks. “Is it Tunisia, Sudan, Madagascar or Nigeria?

One of the 12 members of the crew, each wearing a fluorescent yellow reflective vest branded with “Community Court Crew” on the back, hesitantly guesses Sudan.

“I might even suggest you change your mind,” Baseden offers, before pointing out some trash along the curb of NW Davis that needed to be picked up.

Not heeding the advice, the group stands by the incorrect answer while removing cigarette butts and other litter from the area. Despite missing the answer, ample time still remained for redemption, as this was just one of more than 50 questions that Baseden would ask his litter removal crew on a Thursday late last month.

Baseden, 62, has spent the past three years leading community service work crews for Portland’s Westside Community Court, which handles the adjudication of petty violations in the Clean & Safe District.

“I have these strangers, all wearing the mighty yellow jacket and picking up trash,” Baseden said. “I could leave it at that, but I don’t.”

Instead, as Baseden leads his crew around the sidewalks of downtown Portland to clean up litter, he quizzes them on topics ranging from world geography to pop music. He is engaging them with what he calls “cultural literacy.”

“Some people call it trivia,” Baseden says. “But the goal is to be able to talk to anyone about anything.”

Hours before, as Baseden checked the names on his roster and passed out the vests and other tools of the trade — brooms, dustpans, trigger-action trash pickers, and a pushcart to ferry an industrial-sized garbage can — he set the tone for the day.

According to the Portland Business Alliance, which manages the Clean & Safe District and the Westside Community Court, 134 people reported for community service on Baseden’s crew in the month of April. In that time, they removed 123 bags of litter from 972 city blocks and cleared 598 drains.

More than 7,000 people have performed community service through the Community Court program, and the PBA estimates the value of the restitution done by the crews to be worth nearly half a million dollars.

Alexandria, a 20-year-old student at PCC, ended up on Baseden’s crew after being cited for failing to pay MAX fare. (The last names of those serving on the Community Court Crew were omitted out of respect for their privacy.)

“We had three options,” she said. “It was go to jail, pay the fine, or do eight hours of community service.”

Baseden says people generally end up on his work crew because of their values, attitudes and beliefs, which stem from their choices and decisions.

“Oftentimes, the people who come to see me are people who have made one or a series of the same kinds of mistakes,” he said. “A key thing that I’ve had to do is to challenge their thinking, not only on an individual level, but also as a group,” he said. “So I use teaching techniques such as cooperative learning. I use the group dynamic, where the whole is greater than the individual.

“What I try to do is get people to think about their decisions and what they’re doing,” Baseden said. “And then from there, they can make better decisions for themselves so they don’t have to come back and do community service.”

Heading out of the parking garage at NW 1st and Davis, Baseden quickly fell into the role of quizmaster.

“What is the second-oldest toy in the world?” he asked. “Is it the doll, the Yo-Yo, or none of the above?”

Choosing the doll earns the crew another wrong answer, but again, many more questions were to follow as Baseden led the crew up NW Davis and then west on NW 11th Avenue.

Born and raised in Portland, Baseden graduated from Jefferson High School and has a background that is as varied as the questions he throws at his work crews. He holds degrees in education and communication from Oregon State and Portland State universities, and went on to instruct broadcast media classes at OSU. He has worked at a local television station, a company specializing in diversity training, and as a student advisor at Portland Community College.

He has even competed and trained athletes in the sport of powerlifting.

“I’m always using all of those skills,” he said. “I kind of draw from all those different genres of my experience.”

Even the time Baseden spent serving in the Army is evident in the quick bursts of inflection in his voice. “Here we go. Follow me,” he tells his crew, sounding as if he could just as easily be encouraging troops on the march.

Baseden’s sternness, however, is complimented by his compassion, which comes to light when a young man links up with the work crew about five blocks into the shift. Baseden initially dismisses him with the instruction to avoid being late next time. But after the two have an aside for a few moments, Baseden assigns him to push the trash can cart.

Baseden says that his role as community court crew leader puts him in a unique position to help people, but that it also requires him to wear several different hats.

“Today was a situation where I could see that somebody really needed some help, so I bent a little,” Baseden said. “But they know they have to earn what they get. They don’t get anything for free — they have to earn it. But the key element is that the job or task at hand gets done at the same time.”

As Baseden continues to lead the crew through downtown and back to Old Town, the slew of questions never stops. Which grocery store was the first grocery store chain in the U.S.? Which television station was the first in Portland? How many hearts does an octopus have? Which came first, Nordstrom or the paperclip?

“I didn’t expect it to be like this,” Alexandria said. “It’s entertaining, and you really get to know the other people you are picking up trash with. You get to see everyone’s personality.”

Keith, a 57-year old from California, said he too was cited for failing to pay MAX fare, but didn’t expect to walk away from a shift of community service with a smile on his face.

“As we’re walking, we’re talking,” Keith said. “We’re communicating. It freshens the mind and it keeps your mind going. Instead of just picking up garbage, he (Baseden) adds a little punch to it.”