Vendor profile: Making each day better than the ones before 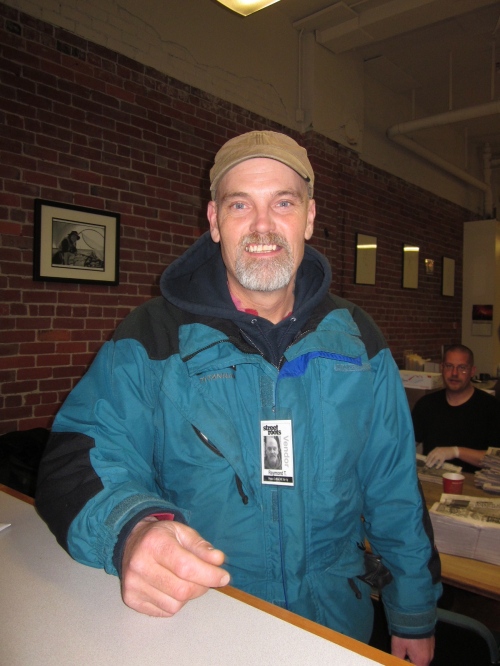 It’s a sunny day on NE 15th Avenue and Broadway when Street Roots vendor Raymond Thornton and I sit down to chat outside of Peet’s Coffee. People are walking their dogs, enjoying coffee outside, and generally greeting the day with enthusiasm. Raymond is no exception; he thanks God for the day, for the evidence of spring, and for the good workday the sunshine is offering him. He loves working at this spot, and not just on the beautiful sunny days. Raymond has been selling outside of this Pete’s Coffee corner for roughly two months now, and he has become a part of this corner’s “circle of friends.” A woman and her dog stop by for a hello and a pat, Raymond knows both of their names and greets them excitedly. An elderly man makes his way by our table and before he can speak Raymond beats him to it, “I owe you a paper, sir!”

“Yes you do,” replies the man slowly as Raymond pulls one of two remaining papers out of his bag to hand to the gentlemen, who bought a paper in advance another day when Raymond had run out.

Raymond seems to not only know everyone’s name, but also where they like to hang when they come to Pete’s. He points to where the cyclists sit, where the dog walkers sit, who buys papers, who makes regular donations. For those that he doesn’t know that walk by, he approaches them with an honest question, “Are you a fan of Street Roots?”

He doesn’t want to be called a “salesman,” although he does have an extensive background in sales. Rather, he is successful at selling papers because he is a part of the fabric of this corner. Raymond likes to tell people where their dollar goes, which they appreciate. Recently one of the Peet’s Coffee staff got in touch with Street Roots, asking that this location become Raymond’s permanent spot. He has been officially invited in, and he is ecstatic over it.

Then again, Raymond comes off as a fairly ecstatic guy. He has good news to share with people about Street Roots, about where he has been in life, and his road to recovery.

And it is the turmoil of his past that has brought him to where he is now, seeking daily a state of grace and peace through his relationship with what he describes as, “the Divine.” Raymond’s faith and his daily practice of prayer and meditation is the evident well-spring of his joy, and his positive attitude and spirit are his efforts to share this joy with others.

Raymond describes finding his relationship to a higher power as a “big hug” that hit him in his mid-30s while he was in jail. Struggling for years with addictions, this experience was just the beginning of a much longer road to recovery.

Raymond moved from his home state of Washington to California at age 18. This is when and where he began his “drinking career.” “It’s a big part of my life,” Raymond says about drinking.  “I’m an alcoholic, I just don’t drink anymore.” There is a lot of pain in his past, and he talks about it with the same level of genuine honesty that he would tell a customer he needs a dollar for Bic razors for his clean-shaven head.

He was married for a time, but reflects that “drunk boyfriends are cute, drunk husbands are not.”

“Was there really room in my marriage for a drunken life style?  After a while, there wasn’t room in my drunken lifestyle for a marriage.” The marriage ended. Raymond has suffered bouts of depression, from his addictions and from loneliness.

He has nearly died of multiple drug overdoses, and recalls a doctor telling him angrily, “Raymond, you need to learn to live well, because you don’t die well.”

Raymond describes addiction as a dimension of stunted emotional growth, and likens it to being locked in a car on the side of the road with no gas. Stuck, going nowhere.

Recovery for Raymond was found last August at Hooper Detox. Mary, a representative of the Central City Concerns Community Engagement Program (CEP), asked Raymond if he was ready for recovery. The program helps people who have experienced hurdles and stumbling blocks, and turn them into steppingstones, as Raymond describes it. It is a program that believes in stability before recovery; they were able to get Raymond housing and on his feet. He admits that it didn’t stick the first time, but Mary believed in him enough to give him a second chance, and he hit the ground running.

Now, Raymond is deeply invested in a community of people in recovery, and he loves it. He recently received eight certificates of course completion through CEP; his efforts are being recognized and celebrated daily. He is among a group of like-minded, spiritual people there. He says they aren’t the religious sort who believe in God because they are afraid of going to hell, because they have already been there. Instead, they are looking to make amends for their past mistakes and begin each day living their lives more fully. This is what Raymond is all about, taking things day-by-day. In his prayer and meditation he asks for “courage strength focus and enthusiasm, and to do 1 percent better than yesterday.”

The vigor with which Raymond praises the good things in his life give the impression that he is no longer stuck in that broken down car. Of course this isn’t the whole picture, the hurdles of recovery and addiction will always be with him. And there are still many parts of his past to make amends for or put behind him. But the point for Raymond is to embrace the struggles as part of life and to keep on. “You can only stumble when you are standing up, in motion and trying to move. I enjoy stumbling. As long as I get up one more time than I fall down.”