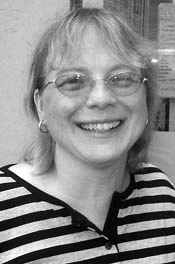 Letting go of Sisters Of The Road has been a gradual process for Genny Nelson, and for good reason. It is no small measure to say that the organization — which includes a cafe, a civic action group and a resource and organizing center for the homeless — has been Nelson’s lifeblood since she and Sandy Gooch founded it 30 years ago.

As Sisters now marks three decades this month, Nelson is formally retiring. The former executive director has amassed milestones that stem from the extremely personal to the highly public, including the National Caring Award, and made her an icon in the homeless community.

Ironically, Nelson’s retirement comes as the number of people on the streets continues to escalate and poverty creeps into more and more households across Portland. We talked with Genny about her thoughts on these times and her reflections of what continues to be a lifetime of service.

Joanne Zuhl: Sisters Of The Road is celebrating its 30th anniversary this month and the demand for your services has never been greater. How has Sisters adapted to the changing – and increasingly challenging – times over the past three decades?

Genny Nelson: We have stayed the course. Sisters Of The Road is as passionate now as when we first began, about who we are. Sisters is a nonprofit organization grounded in the philosophies of non-violence and gentle personalism, while operating from a community organizing model, all within a systemic change approach.

We believe if you want to solve homelessness, do more than satiate the immediate, urgent needs of homeless people, build community and share power with them; create systems that teach self reliance instead of dependence; and remember, until men and women experiencing the calamities of homelessness and poverty are full participants at the table where public policy on homelessness is being decided, we will never resolve it.

J.Z.: How is homelessness in Portland different today than when you and Sandy Gooch opened Sisters 30 years ago?

G.N.: There are so many more people on the street now, thousands more. Between 1976 and 1982 the federal department of Housing and Urban Development built over 755,000 new public housing units, but since 1983, only 256,000. It is no mystery why the number of people living on the street has increased dramatically.

On a positive note, by the end of the ‘90s a transformative discussion among people dealing with homelessness began to take place. They were telling themselves and anyone else who would listen that they did not feel ashamed because they were poor. On the contrary, doing political and economic analysis of the society they were increasingly left out of began their social movement.

J.Z.: Homelessness, hunger and poverty are on the rise in Portland and across Oregon. If you were just embarking on your career today, where would begin, what would you do first?

G.N.: The first thing I would do is begin to build authentic personal relationships with lots of people who were dealing with homelessness.  I would go to the places they frequent: soup lines, coffee shops, missions, shelter lines, day labor sites, warming centers, libraries, the waterfront, neighborhood bars, etc.  I would introduce myself and ask if they were interested in talking with me. If yes, I would ask them their name and invite storytelling that included both of our lives.  I would listen carefully for the issues that mattered most to them.

J.Z.: For all the work you’ve done, what do you feel is your greatest accomplishment?

G.N.: Founding Sisters Of The Road with Sandy Gooch is my greatest accomplishment.  My children are my greatest gifts.

G.N.: Sisters Of The Road is also my greatest unfinished project.  It will always be a work in progress, a daily experiment in truth.

J.Z.: What are you going to do in your retirement? Are you still going to be out there telling our representatives what they need to know?

G.N.: I’m going to connect with my family and friends more deeply.  I am going to write.

My spirit and my passion for human rights are as strong as ever. I will find ways within the limitations of my health to continue trying to make a difference.

J.Z.: Will we see you having lunch at the café now and again?

G.N.: Of course you will see me eating in Sisters Of The Road Café from time to time.  It is my favorite restaurant!

This entry was posted in Street Roots and tagged homeless, Joanne Zuhl, Sisters Of The Road, Street Roots, vendors. Bookmark the permalink.