Sending out an S.O.S.

Police, shelter workers and advocates work to piece together a month long pattern of violence 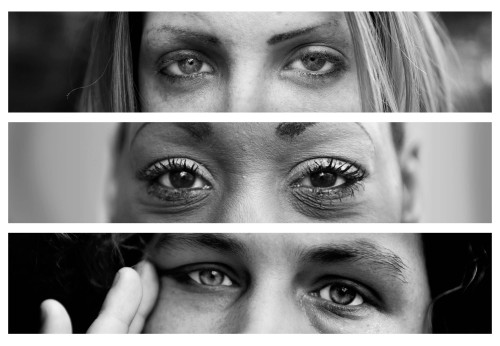 By Rebecca Robinson
Contributing Writer
On a recent Friday afternoon at Sisters of the Road Café on Northwest Davis Street, women shared their stories of sexual assault and domestic violence. One woman, who asked not to be identified by name, said that her 14-year-old daughter was recently gang-raped at a party by three teenage boys who attend her school.

In downtown Portland, a recent set of incidents has brought the problem into stark relief for women on the streets.
Portland police, homeless shelter workers, and women’s crisis advocates are working to piece together a month-long pattern of violent sexual assaults by multiple male attackers on young homeless women. But the police are struggling to conduct an investigation because the victims, many of them sex workers, fear that going to the police may lead to their arrest for other unlawful activities.

A former sex worker known as Jasmine contacted Street Roots last month, saying, “I have a story that needs to be told.” It was a story that, for some on the streets, was all too familiar.
END_OF_DOCUMENT_TOKEN_TO_BE_REPLACED

The troubling results of the Portland Vulnerability Index survey on the health and likelihood of death among Portland’s homeless has spurred the city and housing bureau to act quickly as cold weather sets in.

On Wednesday, Nov. 19 the Portland City Council is expected to vote to provide $200,000 in funding to create two new “warming centers” that will allow 150 to 200 homeless individuals and families to escape the nighttime cold between November and March.

The proposal comes from City Commissioner Nick Fish and the Bureau of Housing and Community Development, which has already secured $100,000 from Multnomah County for a family-focused warming center. The council is also being asked to provide $42,000 to cover the shortfall in funding for already approved winter shelters for men and women.

In the past six months, Portland providers have reported a 50 to 60 percent increase in the number of families seeking shelter, showing that the national recession is having local repercussions, necessitating an increased safety net in times of scant resources.

END_OF_DOCUMENT_TOKEN_TO_BE_REPLACED 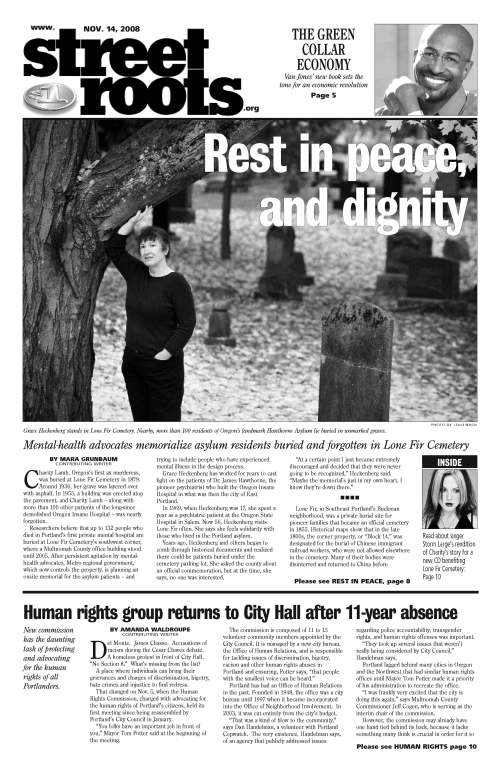 All the news that’s fit for a vendor’s hands hits the streets tomorrow, so don’t be shy. Say hello, pick up a copy for the road and an extra for the family that’s headed your way.  Here’s a sneak peak at what’s inside:

Rest in peace, and dignity: Mara Grunbaum explores what lies beneath the Lone Fir Cemetery where residents of the Hawthorne Asylum will finally get some recognition. It’s an extensive look into the memorial being constructed to remember those who have been paved over. Look also for the Storm Large interview on her interpretation on a woman lost to the unmarked graves.

Human Rights group reconvenes – 11 years later: The city has reinstated it’s Human Rights Commission, charged with protecting the liberities of Portland residents. Amanda Waldroupe reports on the potential for this group, the expectation of advocates, and the issue of enforcing corrections to complaints.

City concedes need for more shelter: Amanda Waldroupe follows up on the shift in city policy to increase the number of shelters, or “warming centers” to accommodate the spike in the number of sick and homeless people on Portland’s streets.

Hobo Homes: A report from our Canadian counterparts in Vancouver on how the anticipation of the 2010 Olympics is falling flat in its promise of helping the homeless – or at least not creating more.

And that’s all just $1 away – and a smile away, with so much more inside.
Check it out, and let us know your thoughts. We always love to hear from you (seriously – always)!