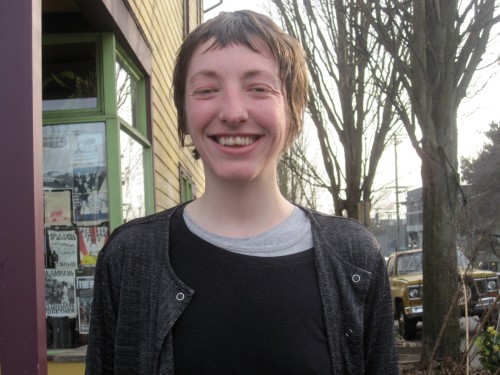 Street Roots vendor Jenni sells outside of Zupan's at Belmont and 33rd Avenue.

Jenni, a petite woman with short hair and an endearing smile, describes her post selling Street Roots outside of the Zupan’s on Belmont and 33rd as the location for the happiest shoppers in Portland. This seems to delight her, and she describes the area as a “super neighborhood,” where everyone is smiling and with beautiful children and dogs, carrying flowers and enjoying life. In Jenni’s Portland, people seem to be happy, the forests are beautiful, and there is space for any kind of person to find peace and home. Jenni moved here two years ago from Michigan with her best friend and traveling partner Justin. They had already been close for years when together they decided to sell everything that they owned and venture west. They say it took 5-6 months of saving money, a lot of soul-searching and one-way Amtrak tickets to get both of them to leave behind the only home either of them knew for Oregon.

Jenni described Michigan as a much harsher place to live. She experienced more violence there and recalls getting held up at gun point, on her birthday no less. The dangerous environment, coupled with a bad economy and a desire for adventure, led her and Justin through the mountains on a two-day train trip with the few things left that they owned. It was a beautiful way to travel and Jenni describes the trip as gorgeous, barring the less than inspiring scenery in North Dakota. Traveling in March at the end of winter, the pair began to feel panicked as they approached Oregon with the scenery around them still covered in snow. They began to rethink their little tent and lack of winter gear, sprouting final seeds of doubt and cold feet after nearly half a year of preparation. The image of arriving in a city blanketed by snow, with no home or possessions was nerve-wracking and scary. To their happy relief, they pulled into Portland’s downtown train station to greet an unseasonably nice, 65-degree day, just the greeting they needed to start over in this new city.