I write this letter to the Portland City Council as it seats two new members: Mayor Charlie Hales and Commissioner Steve Novick. As you sit down over the next few months building new relationships, making new appointments, swapping bureaus and considering new directions. I offer this prescription for healthy streets:

Our streets have the potential to transform our communities. Trans-portation policies of the past too often divided communities, particularly those most underserved. Instead, be inspired by the potential offered by building livable communities that are vibrant, active and economically sustainable for everyone. END_OF_DOCUMENT_TOKEN_TO_BE_REPLACED

BTA: Beyond the presidential race, your vote can change Oregon

First, I’d like to pause and say goodbye to Margaux Mennesson. Margaux has served as The Bicycle Transportation Alliance’s Communications Director for the past four years. She is moving on from BTA and co-authoring the Healthy Street Beat. All of us at BTA and Street Roots wish her the best in her new adventures.

Election time is right around the corner. My parents always said voting was one of the most important things an American does for his or her country. Now we live in times of high-tech polling that only shares the current “opinion” of voters. We can read complicated statistical analyses of possible outcomes before a single vote is cast. END_OF_DOCUMENT_TOKEN_TO_BE_REPLACED

BTA: To build support for bicycling, you need to tell a good story

Lenny Anderson has been working and riding his bike on and around Swan Island for over 20 years. He recently retired from his position as director of the Swan Island Transportation Management Authority. The first time I met Lenny was when this photo was taken. He went out of his way to arrange for us to be able to enter the shipyard on the island (it’s normally closed to the public) and give me a tour of bike facilities.

Elizabeth Quiroz is the BTA’s newest employee. In her position as Bike Commute Challenge Program coordinator, her job is to encourage people to try riding bikes during the month of September and teach bike commute 101 workshops. She lives in East Portland and had never tried bike commuting until this year.   END_OF_DOCUMENT_TOKEN_TO_BE_REPLACED

In just a few short weeks, the Portland’s free rail zone for both TriMet light rail and the streetcar will end its more than 37 year history. The concept was adopted in 1975 to combat limited parking and air pollution and was initially referred to as Fareless Square. However, due to budget restrictions, the program is ending at the close of August.

The days of hopping on a train or streetcar downtown and going a few blocks is over. Will this mean a sharp increase in people driving downtown? We don’t know. People typically don’t get in a car to drive a few blocks anyway. It is more likely to cut out trips entirely. This could have more of a financial impact to restaurants and small businesses than anything else. There have been many times that I’ve jumped on a train both to save time and extend my noon lunch choices. I’m lucky, though. I can jump on my bike and take that short, simple trip by bike in as short if not a shorter amount of time. END_OF_DOCUMENT_TOKEN_TO_BE_REPLACED 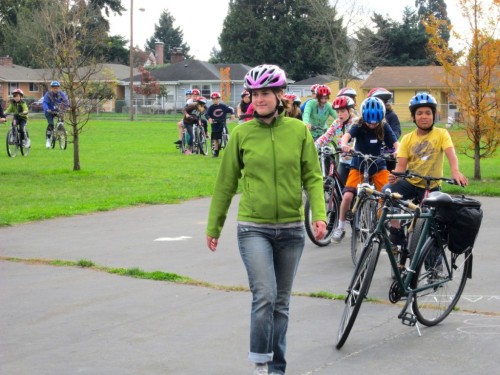 “I want to have your job when I grow up.”

When the Bicycle Transportation Alliance’s Bike Safety Education instructors hear remarks like this from kids they’re teaching in Portland, it’s both rewarding and exciting. If we plan to meet the growing demand for bike safety programs in schools, we’ll need to hire more teaching staff to teach the curriculum – so we’re glad to hear that kids will want our jobs!

In fact, the BTA is looking specifically to hire new staff just like these kids — or their older brothers, sisters, and neighbors — through a new workforce development program starting this fall. The BTA intends to hire two new Assistant Ambassadors from the same communities where the BTA is teaching, said LeeAnne Fergason, education programs manager at the BTA. END_OF_DOCUMENT_TOKEN_TO_BE_REPLACED

Most cities do not enter into a comprehensive community decision-making process to install transportation projects. Projects are designed and built with little to no involvement from neighborhood residents and business owners. Here in Portland, we go the extra mile to engage community representatives in planning, design and implementation of transportation concepts and specific projects. There are a host of great reasons why this makes sense and another host of great reasons why community engagement is frustrating.

On the positive side of the scales, each of us has an opportunity, if we choose, to get involved. We can attend community meetings of our neighborhood association and review proposed plans for important projects like the Portland Milwaukie Light Rail or the 50s Bikeway. Projects have changed, expanded, and even completely stopped because citizens have stepped up and voiced their ideas and concerns. END_OF_DOCUMENT_TOKEN_TO_BE_REPLACED

BTA: The winter of our studded-tire discontent continues

I recently learned that studded tires are only minimally effective in doing the job they set out to do. Drivers can gain better traction with snow tires and get better fuel efficiency. END_OF_DOCUMENT_TOKEN_TO_BE_REPLACED

BTA: Transportation equity? Bring it on

Metro, our region’s elected government charged with helping us make the region an extraordinary place to live, work and play, recently had a bit of a kerfuffle at a recent subcommittee meeting. The Joint Policy Advisory Committee on Transportation (a 17-member panel of elected officials and leaders of transportation agencies) was giving final approval to regional flexible funding, a program of federal money that Metro controls and allocates in two-year cycles. END_OF_DOCUMENT_TOKEN_TO_BE_REPLACED

These are some of the conditions we can expect to see more of when the Portland Bureau of Transportation (PBOT) cuts services and lays off employees to account for a $16 million shortfall in revenue forecasts. END_OF_DOCUMENT_TOKEN_TO_BE_REPLACED

BTA: Finding philosophers and storytellers in the back of the bus

This is part two of a story “One bad accident puts healthy streets in a whole new light” that first appeared in Street Roots in July about Rob’s experiences with transit and mobility while he recovered from a broken collarbone. That article explored struggles with maneuvering around the city.

This article explores the joyful experiences of transit.

I’m a regular bicycle commuter. I see my city through the height of my bicycle with a full panoramic view of my surroundings. I can hear and feel the city as I pedal through neighborhoods, a full participant in so many ways and all alone in many others. I can get some thinking done while I ride, mull over my feelings and occasionally get inspired. This experience keeps me riding even on dull rainy days.

END_OF_DOCUMENT_TOKEN_TO_BE_REPLACED

If you ride a bike, you probably spend a lot of time telling people about the value of bicycling. You describe the benefits for individuals and the community as a whole. You explain that Portland is a wonderful and safe place to ride a bike, but it could be safer.

Chances are you’ve got friends and relatives who think you’re crazy for riding a bike to work, or who don’t understand why transportation dollars should go to bike infrastructure. And chances are, you’ve had a few people come around. I’ve had a few friends and relatives go from grumbling about Sunday Parkways a few years ago to now saying, “Portland should do more of those!”

In my experience, people aren’t convinced by a single conversation. Most people aren’t convinced by traffic counts, crash statistics, street designations, or carbon savings. We evolve in our view of the world by sharing stories, getting to know one another, finding common ground, and discovering shared beliefs among other people we trust. The statistics help support conclusions we’re already inclined to draw.

Having observed the traffic conditions on North Williams every afternoon as I biked home from work, it seemed like there should be an easy solution to get people to slow down, make it safer for people crossing the street, and reduce bus/bike conflicts. Those were some of the safety concerns identified when the North Williams Traffic Safety Operations Project kicked off in April. END_OF_DOCUMENT_TOKEN_TO_BE_REPLACED

I broke my collarbone and three ribs two months ago. I needed to make significant adjustments to my regular commute to work as a daily bicyclist. Walking and taking transit is something I generally enjoy. I like the extra time it may take to arrive at my destination, for I see new sights, hear new sounds, and experience life from a different viewpoint. But I also carry stuff: a lunch, a book to read, my notebook, a water bottle and often a sweater. I couldn’t carry stuff on my body with a broken collarbone — no backpack, no messenger bag. So, I loaded up my stuff into a rolling backpack I had at home and began a new street experience.

Streets are complicated places designed for many different users crisscrossing their way. When our streets are designed well, we move fluidly with no worries of obstacles. When our streets are overfilled, the flow slows down or stops, or in common vernacular, it “locks.” Our streets do not end at the curb — they extend through the sidewalk experience, and when you do that they get even more complicated. We’ll dance our way through the sidewalk experience in different ways than we might if we were driving a car. We rarely think of our sidewalk traffic locking up like our automobile congested streets do, but they present challenges and roadblocks, just the same. END_OF_DOCUMENT_TOKEN_TO_BE_REPLACED

BTA: Bike sharing could be coming to Portland: Do you believe?

Anyone can ride a bike in Portland.

That’s the idea behind the proposal for a new bike sharing program aimed at increasing the number of bicycle trips and providing low-cost access to bikes for residents and visitors in the central city. END_OF_DOCUMENT_TOKEN_TO_BE_REPLACED

BTA Column: By remembering one we lost, we celebrate those we have

On May 12th, the Bicycle Transportation Alliance and community partners held a special tree planting ceremony to remember loved ones lost on the roadway and recognize those who are committed to creating a safe environment for all people on the road. The event was an opportunity to both commemorate loved ones who lost their lives through traffic tragedy and also an opportunity to celebrate their lives by showcasing improvements in the street environment that will prevent future fatalities.

The Bicycle Transportation Alliance, the Portland Bureau of Transportation, the Portland Bureau of Environmental Services (BES), Friends of Trees, Willamette Pedestrian Coalition and the Beaumont Wilshire Neighborhood Association all cosponsored the tree planting.  The tree is the first tree planted as part of the Susie Forest in Portland.  The Susie Forest honors Susie Stephens. Susie was a bicyclist, an environmentalist, an activist, and a world traveler. She was dedicated to educating others about bicyclist and pedestrian safety, and she was killed in 2002 after being struck by a bus while legally walking across the street in St. Louis. The Susie Forest is a living, growing, legacy to Susie and her commitment to creating livable communities.  END_OF_DOCUMENT_TOKEN_TO_BE_REPLACED

BTA: Welcome to Portland — the Portland of North America

Portland is the most successful North American city at implementing policies to promote bicycling, according to a new study just published by researchers at Rutgers University and Virginia Tech.

The authors, John Pucher and Ralph Buehler, compared nine North American cities: Portland, Chicago, New York, Minneapolis, Toronto, Montreal, San Francisco, Washington, and Vancouver. They concluded that “the success of Portland is important because it shows that even car-dependent American cities can greatly increase cycling by implementing the right package of infrastructure, programs, and policies.” END_OF_DOCUMENT_TOKEN_TO_BE_REPLACED

For those who can’t afford free speech
Blog at WordPress.com.
Loading Comments...