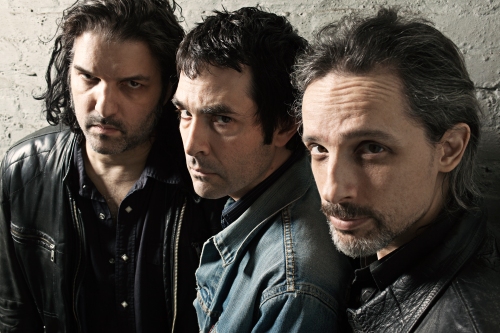 When The Jon Spencer Blues Explosion formed in New York City in the early ‘90s, it was like they threw a bomb in the middle of the indie-rock and blues-punk scene — a non-lethal bomb with no bass. The combination of a cacophony of distorted guitars of Jon Spencer and Judah Bauer, the driving, syncopated beats of Russell Simins and the eerie sounds of the Theremin set the stage for a band that would forever be emblazoned in the minds and hearts of an audience that would follow them on their 20 year journey.

Make no mistake, were it not for the pioneering of these three visionaries, the road to fame might have been more rocky for the bands that would follow their lead:  Sleater-Kinney, The White Stripes and The Black Keys to name a few.

I spoke with Explosion lead guitarist and NYC resident Judah Bauer just hours before landfall of Hurricane Sandy. Bauer, seemingly unphased by the impending devastation that was barreling toward the East Coast, tidied his West Side apartment while we talked about — among other topics — the band’s latest studio album, “Meat and Bone.”

Sue Zalokar: Where are you?

Judah Bauer: I’m on the West Side  I was out last night and it was completely deserted.  Everything closed at six except for the people that wanted to see the spectacle. Some stuff has been blown over.  It looks like the cops are out right now.  Maybe they are shutting down a tunnel or something.  I don’t know. It sure seems like nothing is gonna happen, but who knows?  It will all change in the next six hours.

S.Z.: Are you aware of any services in place for the homeless population in NYC?

J.B.: Yeah.  There are like 70 shelters set up in the city. And there is free transportation. The city seems to be well prepared. Maybe we will find out otherwise.  It doesn’t matter if you’re homeless or you’re housed, if you’re in the flood zone, you need to get out.  They’ll come and get you. You see buses going around that say, “Shelter Bus.” I don’t know where the shelters are. One of them is at The Armory (Bedford-Atlantic Armory Shelter).

S.Z. I guess, in light of Hurricane Katrina, it is better to be prepared.

J.B.: I don’t know.  It seems like everything we do in the future, we do because we want to keep our insurance rate down. We (Jon Spencer Blues Explosion) had to get insurance, back in the day – when we were really rowdy. Stuff used to go flying.  We had to get insurance. I don’t throw shit at people anymore though.

J.B.: New York’s a small town, or at least it was back then. So if you’re in the scene you kind of run into the same people, so I was playing in a band with Russell (Simins) and he started playing with the Honeymoon Killers ,which is a local band here and Jon was in that band. I was a Pussy Galore fan among other bands. I talked Russell into hooking me up with Jon (Spencer) and we started playing.

S.Z.:“Meat and Bone,” released in early September, is the band’s first studio work to put out after an eight-year hiatus.  Where did the motivation for “Meat and Bone” come from?

J.B.: It was just pent up.  A release was required — an explosive release. When we’re on tour we sort of put together songs … to keep things interesting, you know? You can’t just play the songs that you have. You want to keep coming up with new things. In July of last year we started getting together and started focusing on songs to go into the studio. It’s a pretty organic process. It was a pretty concise amount of time. We spent a lot of time writing and we didn’t spend a lot of time recording. It came together pretty quick.

S.Z.: Do you guys write together?

S.Z.: There is an element of confrontation in the music that the band puts out. What’s that all about?

J.B.: Well, there’s a thing that happened in music in the late ’70s — it was called Punk Rock. You’d be surprised at how many people — it just passed them by and they didn’t even hear about it. That was when music was more of a weapon to sort of rile things up. And kind of like early hip hop was, like N.W.A. and Public Enemy and stuff like that.  Music is not like a soundtrack. It’s supposed to make everything in the room stop and you go, “What the hell was that?”  I just grew up that way. So did Jon and Russell. That’s something we have in common – the anti-music aspect of things.

S.Z.: You just grew up that way, so pre-punk. What was influencing you in your home life?

J.B.: My dad, he listens to jazz and he’s an artist. My mom likes Prince. That’s what she was in to. When I was young and stupid like everybody else, I was into Duran Duran and Culture Club and all that shit, because I liked the clothes.  But that didn’t last very long. I got into the whole punk hardcore (scene). I was just 15. But yes, there are pictures of me wearing parachute pants, sunglasses on the strap, and all that crap.

S.Z.: I was always an Andy Taylor fan, myself.  Speaking of bass players, let’s talk about the fact that there is no bass in the band.

J.B.: That’s just convenience. I think if you have Russell Simins as drummer, that just kind of fills the gap. The first week we started playing we wrote more songs than I can remember. We just kind of took off. That was it. From our reference point a bass-less band wasn’t a hurdle to get over conceptually. It was also the whole experimental scene. Something had to be fucked up in the beginning anyway. You couldn’t have everything normal. It worked out.

I’m cleaning something off the seat. I hope it’s chocolate and not shit. But anyway, that’s what I’m doing.

S.Z.: There is a fine line between chocolate and shit. Good luck with that. Back to the topic of being controversial. The name of the band has been confrontational itself. The Jon Spencer Blues Explosion, but really your music is a combination of punk, dirty rock, blues and soul music.

J.B.: Originally we were kind of an art punk band. Somewhere along the line we became more of a rock ‘n’ roll band.  I didn’t come up with the name. My priority back then was getting high. But as far as what a band name was, I didn’t really care about that. If I had been sober, maybe I would have had a different opinion.

S.Z.: A recording the band made in Mississippi in 1996 with R.L. Burnside of his tune, “Going Down South,” is featured on a new album featured in a December issue of Mojo Magazine. What was it like to work and mentor with R.L.?

J.B.: I always loved blues, but I didn’t ever think I was going to try to play it. After hanging out with R.L.  and sort of getting the blues in an authentic manner, I was just soaking it up.

He was kind of a rascal — a lot of fun. But he also cares a lot about the blues and he definitely had an impulse to pass it on to anyone who would take it seriously.  He really had his own style, his own sound.  And he had some really good poetry.

Everybody clicked with R.L. He has so much soul, as a person. He turned me onto his raunchy stories and his tunings. I probably would have picked it up anyway, but it was a lot more fun and quicker getting it from him. Kenny Brown too. He was a little more fluent in explaining what was going on with the tunings and stuff. R.L. would just play it on the guitar, then hand you the guitar.

I’m sweeping the floor, is that OK?

S.Z.: You once held a job as the caretaker at a cemetery. You were a grave digger.  Interesting day job. Did the work give you any insights into life?

J.B.: It was a good metaphor in a way. Just having to do physical labor all day kind of helped me get clean off the drugs. It helped me to get out of my head and my neuroses. It was kind of like a reboot, I guess. It wasn’t a long run. I was there for three or four months. It was hard work, but it was good.

S.Z.: Explosions are notoriously fast lived and impact everything around them.  Yet, the Blues Explosion has stood the test of time.  Where do you see the band going from here?

J.B.: It’s like Bob Dylan. As long as he doesn’t do a bad record, I’m happy. So maybe that’s good enough at this point.