Vendor profile: A walk, a talk with a new friend 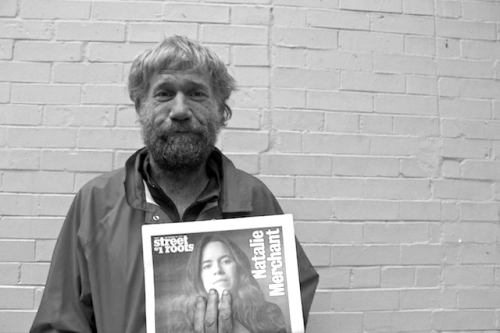 My morning with Street Roots vendor Raymond felt more like a casual stroll through Southwest Portland with a new pal than an interview. Our walk started at the Street Roots office at Northwest Second Avenue and Davis Street and took us to Southwest Sixth Avenue and Main, where Ray sells papers some mornings. It was made longer by the fact that we both became distracted in conversation and briefly were lost.

Taking the long route didn’t bother Raymond at all, he prefers walking anyway and doesn’t take to staying in one spot all day. And although neither of us had our eye on Main, Raymond did keep an eye on potential customers and sales he could make as we traveled. This laid-back attitude is more of Raymond’s style.
A lanky redhead standing well over 6 feet, Raymond speaks with a mixed southern drawl that supports his approachable and friendly vibe. He has been selling Street Roots for more than two months now, and he likes it. He says it gives him something to do, and he is impressed with how well received the paper is in the community. He describes himself as bashful, but by the end of our conversation I think a more appropriate adjective might be “humble.” He calls himself “a hillbilly lost in the city” even though he traverses the streets with comfort, and he has a positive outlook about selling papers and meeting people, preferring to be a source of positive rather than negative energy. “I figure attitude can rub off; Sometimes it takes just one word to bring someone down. I don’t want to be the one to cause that. I’d rather uplift somebody.”

He also spoke of his “average” music abilities, calling his command of the guitar, harmonica and dulcimer just good enough to “keep himself entertained.” With pride he credits his late younger brother as the real musician, and lists many of his musical successes. This mediocre self-evaluation of his own skills was dispelled later that day when a Street Roots staffer raved about his impromptu and spectacular harmonica playing in the office recently.

While Raymond claims Missouri as his home state, he was born in Ontario, Ore., and grew up in a nomadic family that followed work around the country. His dad was a truck driver and heavy equipment operator and took his family to Oklahoma, Mississippi, Arkansas and California over the years. “There were times we would wake up and think we were going to school and then there would be a U-Haul truck,” says Raymond of the constant moving. He didn’t think that he spent more than four years in any given place.

His adult life took on a similar pattern when he began dividing seasons between Kansas City, Mo., and Portland, following work just like his dad; but for Raymond, his industry was roofing. Initially Portland was just a point on the map, an opportunity to escape the unwelcome heat of the Midwest and South, but steady work in roofing kept bringing him back. Over the years, the work has dried up. “Ten, 12 years ago, the economy was booming,” he said. “You could practically quit one job and go across the street and get another one. It just ain’t that way any more.” The recession, coupled with a shattered knee that still goes out on him and some ancient felony charges, have made it increasingly difficult for Raymond to find work.

His knee gives him trouble and makes it difficult to stand still, so he walks; around downtown mostly, but he also meanders across the river and can be spotted selling at Lloyd Center from time to time. “I don’t do it to make big bucks at it, I do it to get the supplies I need.”

“I’ve always worked,” he continues. “There is nothing lazy about me. Now I’m down here on the streets and I figure at least Street Roots is something to do. Make a few dollars, legally, without breaking my pride. I’m too proud to steal and I’m too proud to panhandle.” Ray has a strong sensibility toward hard work, honesty and respect. It was just the way he was raised. But he adds with a little smirk, “It keeps me honest really, because I’m a red head, I can get in trouble.”
Maybe it is the strength and stubbornness of a true redhead, but Raymond seems to know just who he is and what he stands for.

Raymond is available for labor or odd jobs. While his knee may prevent him from extensive labor, he can still put in a days work. Whether you are looking for some interesting conversation, a new copy of Street Roots, or a worker for a project or job, Raymond can be spotted between downtown and the Lloyd district, providing a positive word and walking gingerly about town.