Vendor profile: A traveling poet finds a place in Portland 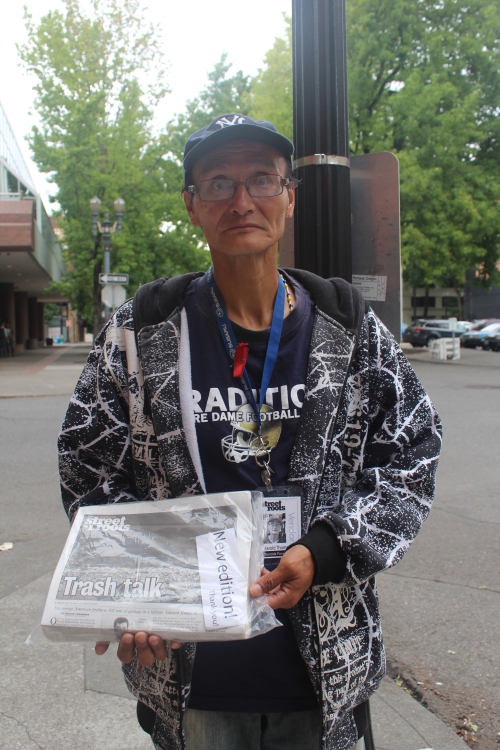 Like most Street Roots vendors, Harold Thompson has experienced poverty up close. In 30 years of traveling, he says he has visited all 50 states and has spent extended amounts of time in Los Angeles, Chicago and other major American cities with starkly disparate economic gaps. What sets him apart from most other vendors, though, is that Harold has lived in a place with the most severely entrenched poverty in the United States. Harold is Native American — mostly Sioux, part Chippewa — and spent many years of his life on the Sisseton Reservation in South Dakota.

“In an urban environment you see nothing but homeless people who are on the streets all the time because they have no place to go,” says Harold in his calm, soft-spoken voice. “But a reservation is a lot tougher to live on because there’s hardly any work and there is little to do there. They have a high rate of alcoholism, poverty, hunger, and most all the kids that do go to school drop out. There is a South Dakota reservation that was ruled by a teenage gang a few years ago. That reservation is only three miles from the Nebraska border, so a lot of the people who live on it go there to get their alcohol.”

Much of Harold’s poetry — which he produces prolifically — alludes to his hopes of reconnecting a communal identity in the wake of the United States’ genocide of Native Americans less than 150 years ago. “When I do write, it comes from up here,” he says pointing to his head. “I just write down whatever I feel.”

Mitakuye Oyasin “We are all related”
We are like the stars, there are a great many of us.
We are like the sea, we have many voices.
We are like the skies, always changing from beautiful to
Ugly and mean.
We are like the flowers, still young and learning
We are like the trees, very old and wise.
We are like the young, sweet and innocent, souls
Dreaming of how we came to be
We are like the circle, connecting at all times
We are like a family, strong enough to hold together a tribe
We are like the buffalo, when they lived in harmony
With each other
We are like the people, with a spirit that is indomitable
And ever powerful.
Harold’s life has followed the Native American diaspora. After being adopted at the age of three, he moved with his mother to southern California in the wake of the federal government’s Indian Relocation Act of 1956. He served in the Air Force during the Vietnam War and, after graduating from UCLA with a degree in human services, Harold returned to the South Dakota reservation to connect with his birth family. He worked as a teenage youth counselor while he was there. “I taught them about the dangers of alcohol and drugs,” he says. “I used myself as an example because I was an alcoholic, but I’ve been sober for almost 30 years.”
Harold is a father of three and grandfather to 13. His son followed in Harold’s footsteps and is currently serving active duty as a combat pilot for the US Air Force in Iraq. Harold moved to Oregon a little over two months ago searching for work. He has since established himself at the Burnside door of Powell’s bookstore downtown. Stop by and say hello, and search the paper for his poetry, which gets published frequently.

Cole Merkel is the Street Roots Vendor Coordinator. If you have a story you would like to share about your favorite vendor, feel free to contact him at cole@streetroots.org.

One response to “Vendor profile: A traveling poet finds a place in Portland”