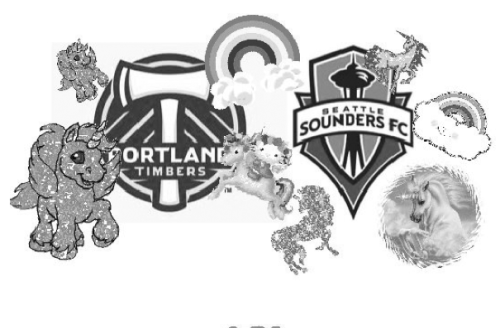 In an unprecedented press release taking MLS by storm, the Portland Timbers and Seattle Sounders have announced an end to their legendary rivalry, looking to lead by example in a new era of cooperation.

“This has been a long time coming, and has been in the works for over a year,” said a Timbers Army representative.

It all began when West Hills socialite Geneva McMervin found her daughter in tears last spring. “She had been dating a nice young man from Seattle, and to celebrate their engagement they decided to go to a match together. When they met up, he was wearing an ECS (Emerald City Supporters) scarf and had a space needle painted on his face.

“He took one look at her No Pity scarf and shouted ‘RCTID? R-C-T-YOU-D!’ –and that was it. She threw her ring on the pitch and marched off to the 107,” said McMervin. Observers say it’s lucky she didn’t bring her axe that day.

It was then that Mrs. McMervin reached out to key individuals within the Timbers Army and ECS, who, though skeptical at first, drafted a negotiation that was eventually signed by the two previously-warring teams.

“It’s good for everybody, especially business,” says McMervin. “The biggest barrier to the Seattle-Portland migration has been this darn rivalry. It’s ripped families, even communities, apart.”

As a show of good faith, the Timbers agreed to transfer Kenny Cooper.

“It proved they were serious,” says a spokesperson from the Sounders.

In exchange, Microsoft disabled the experimental Kinect-based anti-goal technology employed against Kalif Alhassan last season. To apologize for any inconvenience, XBOX will make Alhassan the star of Cascadia 720, the new 4-D footy game due out in exactly one year. CenturyLink has also agreed to stop throttling Portlanders’ internet.

The Portland Food Cart Alliance lauded this decision as well. “People had started making t-shirts (referring to the KFC – Kenny F***’in Cooper – shirts seen all over Portland last year) and it was clear he had to go…he was opening up Portland to fast food. People who didn’t get it started tweeting about fried chicken and we got worried.”

“The final agreement is good for both sides,” say Timbers coach John Spencer and Sounders coach Sigi Schmid in their joint statement released this morning.

“Our new Cultural Exchange Program will help both teams a great deal while going a long way towards cultivating regional harmony.”

Street Roots produces an annual satirical edition of the newspaper each year on April 1. Support your local neighborhood vendor today and have a laugh on us.