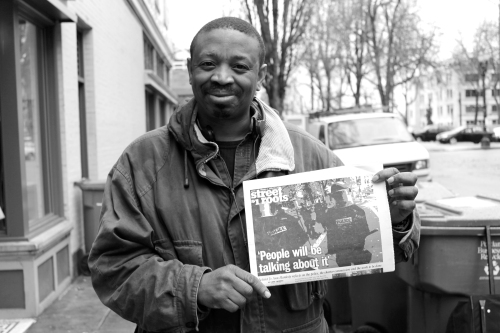 With three years as a Street Roots vendor under his belt, Darren Alexander has been steadily building on a good thing. He has been selling at the Alberta Food Co-op since summer 2009 and over the past few years, has become a respected ambassador with Street Roots, always selling with a smile on his face, recruiting new vendors and spreading the word about the newspaper and the organization.

Now, Darren brings his perspective to the Street Roots board of directors, joining the nonprofit’s leadership in February. A self-described introvert, Alexander hopes to bring his experiences to the organization’s governing body as Street Roots moves into a new era.

“In my own unique way I can contribute to just making the paper better. If I have any ideas, I bring them to the table. As we transition into a new phase of the paper, I want to help make it better.”

In his three years with Street Roots, Alexander has witnessed positive change in the newspaper.

“The stories are getting a lot better and people are becoming more receptive to the paper itself,” he says. And he sees that receptivity as a great opportunity for growth. “I want to bring it to a point where the community doesn’t just see the paper and just say that it’s a ‘homeless’ paper. I hope people get the perception that Street Roots has unique news.”

Alexander’s joins for a two-year term on the board, and he joins Leo Rhodes as the second vendor on the 10-person body. Former vendor Eddy Barbosa also serves on the board. He is still trying to figure out all of his responsibilities, but feels like he is fitting in.

“The group is lively,” he says with a smile. “Being a new kid on the block makes me feel kind of nervous. It’s an entirely new experience for me because I’ve never been asked to do something like this. To me the paper means dignity and community. I’m basically a shy person, but Street Roots has been a way for me to be a little more extroverted and outgoing.”

In his free time, Darren is an avid, “fledgling” writer, often journaling or writing short stories. He is one of the most consistent participants in the weekly Street Roots creative writing workshop. And, on top of his board responsibilities, he can still be found most days selling Street Roots at the Alberta Food Co-op.

Meet the Street Roots board of directors.