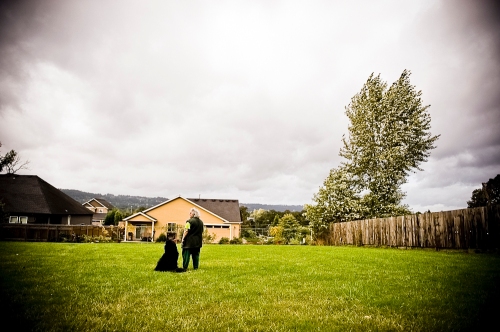 This is the final of five installments from Street Roots and photographer Leah Nash on Asperger’s Syndrome. See the first four installments here.

The project was made possible in partnership with Street Roots and the Regional Arts & Culture Council in an effort to chronicle the diversity of this complex diagnosis of autism, illustrating the challenges and beauty of an unconventional life.

Diagnosed with autism in fourth grade, Leska says, “I knew I was different but I didn’t know why and I had no idea how different I was. I realized that everything I wanted socially, to talk to other little kids and play with them, never happened. It did not happen.” Leska’s autism symptoms were not at the forefront until an unexpected divorce led to an autism regression and subsequent Asperger’s diagnosis almost 40 years later.

In her own words: Leska Emerald Adams

The first time I read about another being having anything near the same experiences and consciousness as me was the vampire revelation, as a teenager reading Anne Rice’s first vampire book, “Interview with the Vampire.” It was a delicious lightning bolt recognition that let me know that somebody out there could relate, albeit a mythical character in fiction.

My abiding similarity to Rice’s vampire is an inner voracious extreme pleasure in life, an amazed appreciation and drinking in of detail, endless close up fascination with beauty and the Spirit within God’s pristine creation.  The drumbeat of progress, of insatiable learning, curiosity, drive for improvement pulses a subterranean rhythm under the current of my existence, leading and driving me, unseen but overwhelming, sustaining, giving rise to intense joy and core enrichment. But, also, when uncontrolled, overtakes all else and leads to executive dysfunction, but a very happy interior.

Leska met her guru, Sri Sri Paramahansa Yogananda, in 1980. He is the most important overwhelmingly prominent subject and influence in her life. For a period of time, Leska wanted to be a nun. Her house is graced with many framed pictures of Yogananda, though the majority of the more than 370 framed pictures she owns are still wrapped in boxes. “The guru is the dispeller of darkness and the engine God appoints to lead one to salvation,” says Leska, explaining her relationship. “He’s your best friend, the most encouraging support, completely in tune with truth, full of humor, extremely eager to help and very, very wise.” 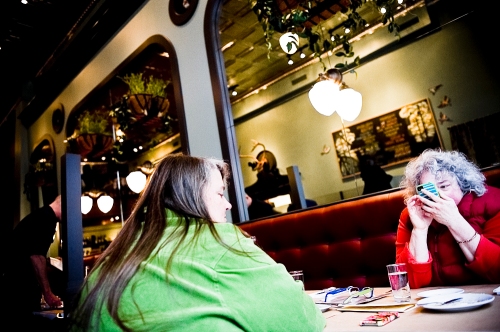 While waiting for a meal, Leska concentrates on her iPhone while Lynn waits. In 1980, Leska started following Steve Jobs and Apple and developed a gleeful obsession. “The minute I saw Steve, I knew that he was an extraordinary human being, and I was thrilled with joy, recognition of excellence and marveling he walked the Earth.”

Still have never actually met anybody on Earth in person that I can recognize as being similar in the most fundamental prevailing aspects.

Sometimes I briefly wonder if I am autistic because of previous inner inclinations, or it’s a karmic result of lifetimes spent relishing the interior life, or if it’s God’s protection in this life, underlying whatever organic chemical biological environmental or other causes for this neurological abnormality which is becoming epidemic.  Autism has its blessings as well as challenges.  The intrinsic ability to focus, concentrate, obsess is an invaluable boon to the spiritual life and yields the most fantastic adventurous inner results wrapped in an ever-new peace.

Leska and her service dog, Orka

I was able to get a doctor’s prescription for a service dog. My spatial disconnect and clumsiness was deplorable, could not walk in a straight line, needed help with balance maneuvering navigating, needed to be given water TP and barf bucket constantly, needed a loyal, loving, cheerful serviceful entity to help me back on my feet, among many other necessary tasks.  Also, transitions are torture for me; the autistic proclivity toward repetition and staying in the groove held me prisoner to my intense one-track joys and absorptions. I need transition cues so compellingly enthusiastically tuned to joy that the switch is bearable. And then the next activity becomes infused with that welcome beautiful happiness, in the zone, zinging with accomplishment and functional pleasure, then help onto the next thing.

Sensory issues with autism, especially hearing, for me. Sensory input is processed differently. Gaps in neuron connections in some areas with over burgeoning connections in others. Autism = neurological wiring is different, broad spectrum, no two people alike, affects each uniquely.  Some signs that autism may be an evolutionary advantage in the direction humans are progressing in the info age. Nerds and geeks reign and rise, hold the keys to advancement, to thinking creating producing outside the box.

Leska says the Newfoundland breed is the perfect match for her service dog needs because of his size, intelligence and water rescue capabilities.

I love to kayak, more motivated by kayaking and going way out into nature unblemished by idiotic man’s destruction than anything else, be surrounded by glorious God unobstructed. Kayaking can be hazardous so it is recommended to always go with another kayaker. But being autistic, the social connection is not there, so need a water rescue buddy. Decades ago I watched in astonishment at George Rogers Park, a sight too splendorous for earth; teams of people and huge furry amazing dogs practicing water rescues, working together with such precision and intelligence, such intuitive teamwork, vowed then: Someday I am going to be part of this.

“When I first got him, I couldn’t kayak, I couldn’t do anything, I was really sick. But what motivates me to try and get better? I love to kayak so it’s like, ‘Oh, I could just croak, but is there anything worth living for on Earth? Well, kayaking.’ So that’s the one thing that motivates me to keep trying to be alive here.”

Leska and Orka go swimming. Leska is a proponent of service dogs for autistic individuals, but warns that training is a monumental commitment and has to be done to meet specific needs. “Your dog will give you what people will never give you. The service dog will give you love, cheer, comfort, loyalty, understanding, some kind of intuitive knowledge that you need help and that you need tasks done, and unconditional gladness to see you and be with you. In every way people fail, the dog succeeds.”

Since getting Orka in February 2010, my life has dramatically changed and improved. Orka is helping me immeasurably. My goal was to breathe and stay alive; now it is to get completely better and return to full functioning.  Because my condition is changing rapidly his service tasks are changing.  Training will be lifelong, ongoing. The autism lends to desire to be still, to live only the inner life, so I have to challenge myself physically to function and overcome outer inertia. 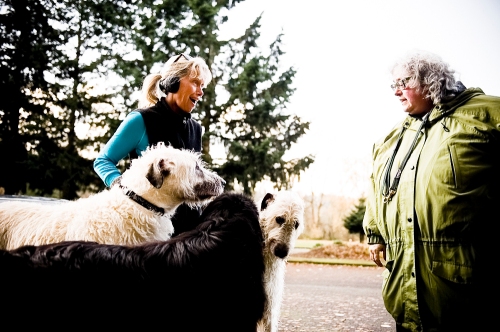 Walking with Orka walking at park.

Walking, Nordic power walking, hiking, backpacking, snowshoeing, skiing, kayaking, swimming, all with Orka pulling me, known as dog powered driving joring, doing/starting / learning it all and loving it!  Also, I will be biking and Rollerblading with him beside me, and scootering with him pulling. And tracking. I am teaching Orka water rescue so we swim and kayak together. He is learning to pull a cart and wagon, drafting, which is very helpful when one cannot yet drive a car. We go everywhere via bus and Max. We are having a blast together and I am getting better every day.

Learning (again) I had autism later in life — I am 51 — has been a consciousness earthquake. So many revelations and explanations. It has changed my thinking, my mental orientations with respect to the world. A huge relief relax valve: no longer even trying to fit in or connect. Tension of puzzlement gone.  I know I’m incredibly fortunate to be alive, to have Lynn providing for me and God and guru giving me the opportunity to get better. 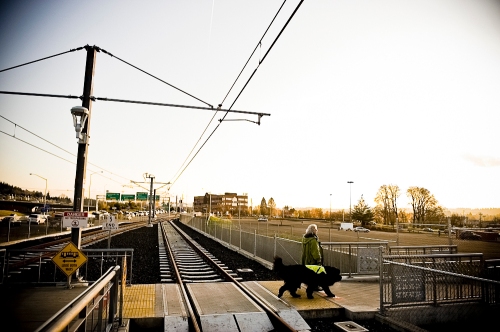 Leska walking with dog on the Max/train tracks in Portland, Ore.

Check out the first four installments:

About this series: Autism is the fastest growing disability in the U.S. with an economic impact of more than $90 billion. The Center for Disease Control reports that now one in 110 children are being classified with autism spectrum disorders, compared to one in 10,000 in the 1970s, and according to the Autism Society of Oregon, our state has one of the highest rates of autistic diagnosis in the country.

First documented in 1944, many with Asperger´s Syndrome can be quite gifted, but are often socially awkward and unable to make friends. Frequently misunderstood, those affected live in a world of missed social cues and difficult exchanges. Called “little professors” by their namesake, Hans Asperger, who noted their talent of acquiring expertise in specific topics. Those with the syndrome usually want to fit in and have interactions; they simply don’t know how.

The objective of this series is to explore the diversity and complexity that exists across this spectrum, for it is often said that people with autism are like snowflakes — no two alike. This work is especially relevant given controversial revisions proposing to do away with the Asperger’s diagnosis altogether in the Diagnostic and Statistical Manual of Mental Disorders (DSM), the diagnostic encyclopedia of American psychiatry.

As history changes, a record must be kept, these stories must be told. Through the support of Street Roots and the Regional Arts & Culture Council, the goal of this series is to encourage viewers to question their perceptions of both Asperger´s and autism and challenge themselves to gain a deeper understanding of the people behind the label.

Please join us as we give a voice to those that often have none.

Leah Nash is a documentary photographer based in Portland. More of her work can be found at www.LeahNash.com.

The project was made possible in partnership with the Regional Arts & Culture Council in an effort to chronicle the diversity of this complex diagnosis of autism, illustrating the challenges and beauty of an unconventional life.

One response to “New Found Aspirgations: A photo story of Asperger’s Syndrome”