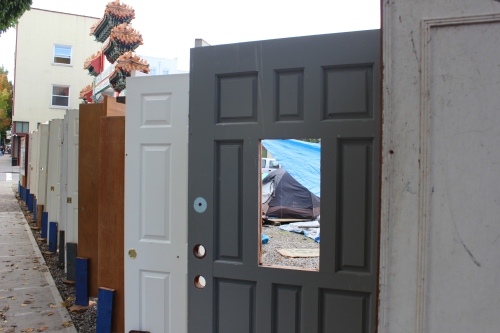 In 2009 when I first came to Portland, I came to rest from all the advocacy I had done in Seattle.  A friend came to me and showed me minutes from the Coordinating Committee to End Homelessness (CCEH). The minutes stated that the committee was not keeping up with putting people in housing. Sally Erikson took this issue to Commissioner Nick Fish. Commissioner Fish said to get eight or nine people together and brainstorm on what to do. I was one of those people.

The alternative committee came up with about 15 ways to help the homeless: from people sleeping in cars in empty parking lots, to rental assistance, to tent cities. CCEH prioritized them from 1 to 15. The results were supposed to come out to the city commissioners and mayor of Portland in January 2010. They were put on hold because of an anti-camping lawsuit. They have been on the back burner over since.

I have appeared before the city commission and mayor many times to talk about the need for shelters and tent cities. I would listen to him explain how he and the council would leave the human services department funding alone; not adding or taking away from the funding for two years. That’s good, but homelessness doesn’t stay at one level. It increases all the time.

Just about everyone in Portland wants homes for the homeless, which is great. But homes are a long-term goal and in the mean time we need some place for the homeless to go.

One of the things I kept asking was, “OK, we have their attention, what are we going to do next?” We couldn’t think of anything.

Then in June, a fellow Street Roots vendor came to me at the Street Roots office. He asked if I had read in the Portland Tribune about a man working with Dignity Village. I got excited and e-mailed Ibrahim Mubarik of Right to Survive. He e-mailed me back and said, “Sounds like this guy wants to use the homeless.” I said, “Yeah, but we may never get a chance like this again.” It was an invitation. A great one. So the contacts were made and in July the meeting was set to meet the owners of the land at NW Fourth Avenue and Burnside. The owners were impressed by our experiences and what we had to offer: Ibrahim is the co-founder of Dignity Village and I started Tent City 4 in Seattle. I remember hearing one of the owners say, “I thought you guys were just some yahoos trying to start this.”

We then started working on the project to bring it to life.

Somebody made the comment, “We need a diversion. Something that will divert most of the attention away from us.” We couldn’t think of anything.

On Oct. 6, Occupy Portland started with a rally, march and camp out. Approximately 10,000 people showed up for the rally and march.

Elsewhere, over the weekend, a fence was built around the vacant lot at NW Fourth Avenue and Burnside; part of it was constructed with doors.

On Monday Oct. 10, we started “Right 2 Dream Too.” There were about seven of us who stayed that first night. It has been growing ever since. By the third day we were almost at capacity and remain so to this day.

This is an exciting and scary time. On one hand, we have Occupy Portland, their loud voices saying, “We’re here and we won’t go away.”

On the other hand, we have Right to Dream Too, which is more docile; making a statement but not so loud.

If you look at it one way, the movements are different. But if you take a deeper look, you realize they are the same.

Walking through Occupy Portland, the first thing you notice is all the tents. It’s like a maze to get to some tents. The other thing you’ll notice about it is all the signs. You’ll see signs protesting banks, Wall Street, the 1 percent, housing, jobs, etc.

Occupy Portland also has different stations: the information tent, medical/first aid tent, religious tent, a place to get a massage, a tent to make art work, an area for children called “kids camp,” a recycling place, a jobs place, a veterans place and a library.

Right to Dream Too is located on NW 4th and Burnside. It is a place for homeless to sleep and feel safe and secure. They have many tents, big and small; one guy even built his own portable one. The tents are covered with tarps to protect them from the rain. There is a little food preparation area, electricity and a portable toilet. There are no services in the camp, but many are within walking distance, including Portland Rescue Mission, Union Gospel Women, SAFES, Downtown Chapel and the Bud Clark Commons, just to name a few.

Both groups provide their own security and clean up in and around the camps. They make up their rules and hold each other accountable for their actions.

I have only seen one sign in protest at Right 2 Dream Too. It stated, “Boomers time to Reboot our Democracy.” One thing I keep hearing is people saying is that homeless people need to start protesting. That’s easier said than done. I mean, it’s hard enough to get out of homelessness. Protesting adds a big weight to carry. In my advocacy work (like the others who helped), I have sacrificed a lot. The mental and physical stress isn’t easy. But I do try to encourage many homeless people.

Just like any society, drugs and alcohol are a problem. If the camp is strong, it should get rid of them. Just like everywhere else, it’s a constant battle.

So, starting an indoor/outdoor shelter, tent city, I’ve learned that there are three stages. You have a core group of people that knows what to do when you bring in the homeless. This is the first stage. You have a mix with different mentalities. Getting them to work together and help each other is different in every case. This stage I call herding cats. Most places don’t get past this stage.

The second stage is what I call evolving. This is where you find your leaders, workers, followers and helpers.

The third stage is structure. You are working on structure all the time. Like Right 2 Dream Too, it’s self-management, giving people a sense of being human again.

The last thing I want to say is this: When Tent City 4 in Seattle was beginning, we asked a church to use their property. The pastor was excited, telling us his congregation loves homeless people. But we had to go through the protocols. We did and the last part was talking to the congregation, then they would take a vote. When we came back for the verdict, the pastor was almost in tears telling us the vote was 15 for us staying, 85 against.

We were devastated. As I was leaving two elderly ladies called me over and said, “Leo, we would like to help you guys, but you homeless are too political.”

I didn’t know what to say. But if I had that time back again, I would tell them that homeless people aren’t political. It’s you non-homeless that make it political with your laws and ordinances and cops.

6 responses to “Right 2 Dream Too more practical than political”