Labor unions led the way in the latest Occupy Portland demonstration, this one challenging police to marching rights over the Steel Bridge. In the end, the peaceful marchers were matched nearly one for one by police in riot gear.

Among the groups displaying banners and signs at the event were the Teamsters, Jobs With Justice, the Service Employees International Union and the Laborers International Union of North America. The marchers, hundreds in strength, began early this morning and are now gathered in Waterfront Park for a rally. Today, “N17,” has been declared an international day of non-violent direct action by the Occupy movement, and plans are to push forward demonstrations at major corporate banks throughout the day.

Kathy Schmidt is a registered nurse who turned out for the protest, saying she is concerned for the people who don’t have jobs or health care.

“I just spent a whole day helping my 28-year-old nephew, a college graduate with debt, trying to figure out how to get a job,” said Schmidt, 58. “I am furious about what we have done to the young people of this country. Absolutely furious! What have we done for our 20-year-olds? Nothing. They can’t get housing. They can’t get jobs. It’s totally irresponsible: The richest country in the world, and we need jobs, health care, housing and food!

Demonstrator Charlie Savoie is a member of the Teamsters who said the unions are in strong solidarity with the nationwide movement.

At the start of the march, which began at 8 a.m. on the east side of the Steel Bridge, many protesters stepped forward to challenge the preemptive bridge closure and were arrested. Among those reportedly arrested was the SEIU executive director Heather Conroy.

“This is the last too at our disposal,” said demonstrator Wes Kempfer. “We have to throw corporate power out of government.”

This mornings action was organized to declare an economic emergency for the 99 percent with 25 million Americans looking for work.

The Steel Bridge is structurally deficient and in need of repair. This is work that needs doing, even while thousands in Portland are unemployed!

Bridges like this one are symbols of politicians failure to pass a jobs bill or do anything to help the 99%, while the richest 1% keep getting richer.

Occupy Portland will hold a series of actions throughout the day along with groups from around the country. The group is calling today, Occupy the Banks Day. 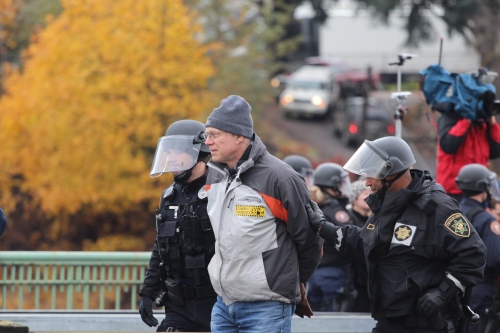 Man gets arrested at the Streel Bridge 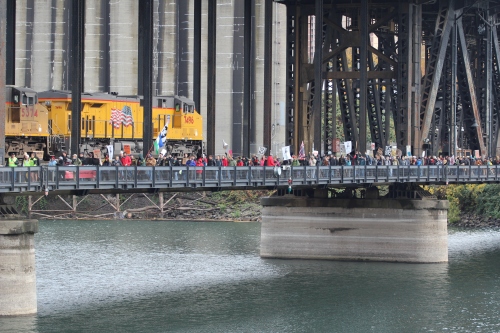