A group of homeless people under the banner of “Right to Dream Too”  have shared with Street Roots blueprints for how they envision the plot on 4th and Burnside to be used. The blueprints layout how a series of tents and restrooms for people on the streets with a barrier around the property made up of doors.

Eight people began to set up shop yesterday (Oct. 10) in response to the lack of housing in Portland, and for a small group of people experiencing homelessness to have a safe and stable place to sleep. By this evening that group had swelled to more than 30 individuals.

“We’re out here because there is no place for people who have no place to sleep to sleep. So we want to bring in a good place where they can come and rest,” says Ibrahim Mubarak, one of the leaders of the small group and one of the founders of Dignity Village.

Street Roots talked to city officials with the Bureau of Development Services (BDS) who oversees both the permitting and zoning process for the lot. According to the BDS a complaint has been filed with the city, and they are currently investigating if the group, or the land owners are in violation of any city codes. The BDS says it intends to follow due process if code violations are found — which could mean fines or liens against the property owners.

According to the people at the site, the property owners, Dan Cossette and Michael Wright, have donated a one-year lease to Right 2 Survive in order to provide a space for people experiencing homelessness to sleep.

According to the City of Portland/Multnomah County 2011 homeless count,  1,718 people were unsheltered (sleeping outside, in a vehicle, or abandoned building) in January of 2011. 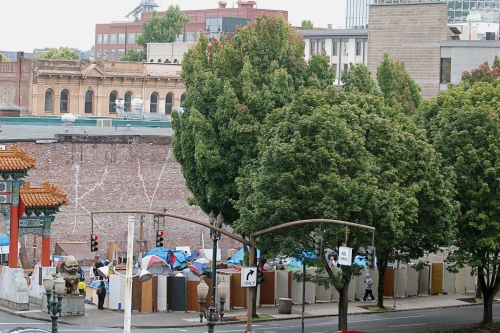 Rules for anyone resting or sleeping at the “Right to Dream Too,” location. See more here.

4 responses to “Right to Survive releases blueprints, continues to grow”