Age of Greed: The Triumph of Finance and the Decline of America, 1970 to the Present. 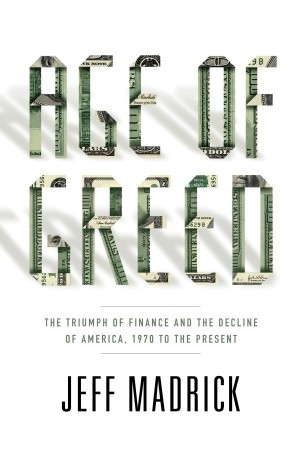 For many liberals and progressives, the cause of all of America’s economic woes begins and ends with the presidency of Ronald Reagan. As a historian, Jeff Madrick feels that to fully comprehend our country’s current economic angst, it is necessary to cast a slightly wider net:

“Coupled with the Watergate scandal and the continuation of the Viet Nam War, which Nixon had promised to end quickly, it was Nixon more than anyone else who undermined the nation’s faith in what it could accomplish and pride in what it was. He not only created the conditions that led to punishing stagflation but, by making the nation so distrustful of government, he lay the groundwork for an age of greed freed of federal oversight.”

Madrick is a well-known journalist and academic who has covered the field of economics since the 1970s. His writing credits include The New York Times, Money Magazine and Business Week. In addition, he has been an NBC News reporter and commentator and has even won an Emmy. In “The Age of Greed,” Madrick presents a straight-ahead history of recent economic disasters and the political decisions that made them possible.

While its subtitle might suggest that the book holds capitalism to blame for America’s decline, Madrick’s analyses are decidedly more practical than Utopian.

“Throughout history, financial crises have generally been similar to each other. An asset — land, housing, stocks, bonds, and so on — rises in price, financial institutions lend to investors to buy more, and prices are driven up to unsustainable levels. When the bubble bursts, investors sell assets to repay their loans and prices fall further, often in panic. Bad debts rise on the books of the financial institutions, credit stops flowing, businesses and consumers sharply reduce spending, and the economy slides into serious recession.” Thus, the author concludes, our recent economic crises, are not so much the product of “an inevitable failure of a system,” but instead are largely the result of “decisions by individuals, set upon making fortunes and becoming one of the Kings of the mountain.”

Madrick’s criticisms of our economic system lie mainly in the area of regulation. In case after case, the author demonstrates how boom-and-bust cycles, crests of inflation and depths of recession have been enabled and even caused by government’s increasing unwillingness and/or inability to rein in the speculative excesses of the marketplace. For example, when analyzing the recent credit debacle that resulted in the stock market crash of 2008, Madrick writes: “The law was simply inadequate to the task of regulation, and the regulators failed to enforce strongly what laws there were. Fines were usually meaningless (and) most of the options market was over-the-counter trading and fell entirely between the cracks; many new contracts — the (credit default) swaps for example — were simply written between the participants in the trade with no outside oversight.” For Madrick, the devastating credit crash that resulted from unrestricted trade in risky sub-prime mortgages is proof positive that while greed by itself may or may not be good, unregulated greed is almost always disastrous.

Perhaps the most alarming aspect of the book is how Madrick presents the principal decision makers in our country: Clueless to the causes of the economic problems of their time and even more clueless as to how to fix those problems when they arrive. “Recession was now likely, but (Fed Chairman Alan) Greenspan disagreed, still more worried about inflation. In August 1990, he told members of the Fed’s Open Market Committee, ‘Those who argue we are in a recession … are reasonably certain to be wrong.’ It turned out the nation was already officially in recession at that point, according to the later calculations of the National Bureau of Economic Research.”

Furthermore, the author notes, even when presidents engage in sincere attempts to fix the economy, too often they scale back or reverse their own measures. “His (President Carter’s) first economic policy initiative on taking office in 1977 was to keep his campaign promise and stimulate the economy to get unemployment down. … In a year and a few months, the Carter administration had already switched the direction of policy three times. But in May 1978, Carter switched again as both inflation and the federal budget deficit started to rise. Now he wanted to cut his stimulus plan and postpone any tax cuts as well.”

In analyzing his chosen time period, the author takes in a huge swath of current history. Not only does he round up the usual suspects, he also throws in a whole slew of economic rogues that you may not have heard of. Madrick presents thumbnail sketches of each person’s life and offers a glimpse into the influences that shaped his thinking. By weaving these quick biographies together with the economic crises that took place during each of their careers, the author creates a complete picture of the events leading up to the drama we see unfolding before us today.

As good as it is at identifying the players in the drama, the strength of “Greed” is also its weakness. The author collects and presents so many different characters, at times the book reads almost like a police dossier or the now infamous deck of playing cards issued by the Pentagon during the Iraq War with each card containing the picture of a different “bad guy.” This minor criticism aside, the book is a remarkably coherent history. Regardless of your political leanings, if you believe that understanding where we are going requires an understanding of where we have been, “Age of Greed” will definitely be a worthwhile investment.

This entry was posted in Street Roots and tagged 1970 to the Present, Age of Greed: The Triumph of Finance and the Decline of America, Jeff Madrick, Street Roots, Thomas Vincent. Bookmark the permalink.