Jaimie Smith seems to radiate.  Happy, with a lot of energy, full of stories.

“My first day, I had the rattles inside,” she says, a bit of laughter behind her voice. “I get anxiety about selling the paper sometimes because you have to put yourself out there on display, you have to be in a good mood.”

She looks at me, asking if I understand. After more than 10 years of customer service jobs, I know exactly what Jaimie means. Working with the general public can be tough. But for her occasional fears, Jaimie finds ways to enjoy herself, and good people find her. 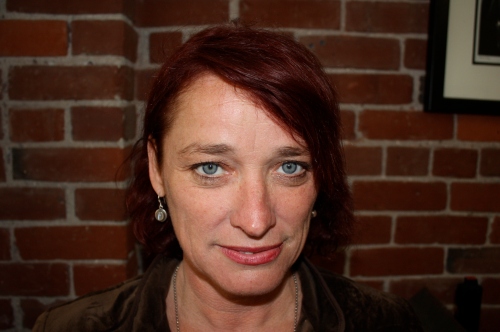 “One thing that really makes me happy about selling the paper is the people,” she says. “I love meeting the people and talking about life or philosophies and current events.”

Jaimie, a vendor since last August, is full of stories about choice encounters with customers. She’s talked about shopping for good skirts with a transvestite. One time a man insisted he was psychic and tried to react to her thoughts. Another read her palm. Once a man walked past, said he “wasn’t feeling” that issue of Street Roots, only to return with a baby strapped to his back.

“I just know everyone has a soul. When I’m selling it keeps the stress off because I think, OK, they’re only human.”

A vendor since last August, Jaimie says she never in her life thought she’d be homeless. Rubbing her arms, she looks over our coffee towards the Burnside Bridge and remarks since she used to sleep under it, she doesn’t like coming into downtown as much.

Jaimie’s eyes are dark for a second, but then they light back up.  Positivity returns.

“There was one officer under the bridge who was the nicest,” she tells me.  “He’d come by and just say, ‘Hey, how’s everybody doing, just so you know you have to be gone by 7 a.m.

“He was so cool.  It made me so happy because he said, ‘It’s cool, you can stay here.’ We need more places like that. … I just keep going back to this idea of human dignity, because everybody needs to have it.”

Jaimie is a mother of two sons, ages 22 and 14. Even though she could go live in Florida with her mother, she chooses to stay in Portland to be near her younger son.  The older is a social justice worker in L.A. who fights for laborers’ rights; his encouragement also helps her find the confidence to keep selling the paper.

“He’s proud of me,” she says. “It’s hard, but then you meet people who really appreciate the paper.

“That office probably saved my life,” she adds, pointing down NW Davis St. “The people are very kind and full of energy.”

With the help of JOIN, Jaimie and her boyfriend were able to secure housing about two months ago, and are focusing their energy on keeping it. Living on the eastside, she now buys most of her papers at Street Roots’ satellite office at 81st and Halsey.

“It’s awesome out there,” she says, “so easily accessible.”

Determined not to sleep on the street again, Jaimie is on the hunt for stable work. Being housed does mean she needs more money for bills, and employment is not always easy to find.

“People don’t realize how hard it is to find a job,” Jaimie says, shaking her head.  After a brief stint at a restaurant, she is back on the hunt when she isn’t selling papers outside of Powell’s on Hawthorne.  On the other hand, “I wouldn’t have gotten that job if I hadn’t had the place, because I could go home and shower and change into clean clothes.

“I’m not gonna be homeless again, I can’t do it,” Jaimie says.

This entry was posted in Street Roots and tagged Street Roots, vendors. Bookmark the permalink.