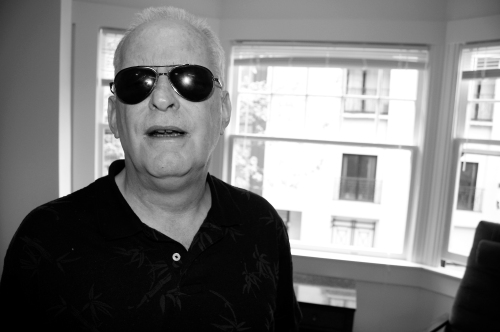 A chain link fence has enclosed the Admiral Park Apartments between SW Park Avenue and SW Taylor Street for the last 10 months, construction equipment and garbage chutes taking up the sidewalk and obscuring the former entrance of Taco Del Mar.

The apartment complex has reopened after being closed in the spring of 2009 for rehabilitation, and 15 of the 37 tenants who were asked to move are coming home.

The rehab replaced the plumbing, electrical, and heating systems. The building was given a seismic upgrade, and repairs were made to the 100-year-old building’s siding and bricks. The carpet is new and the paint fresh. Walking around in the quiet apartment building, it is difficult to imagine that it ever had a bed bug problem.

The Admiral relocation is unique in that it was done to preserve low income housing.  Most relocations have been a one-way trip, as downtown Portland gentrified.

“In the past, people haven’t been able to move back,” says Riad Sahli, the housing development project manager for REACH Community Development, the non-profit affordable housing developer that rehabbed the Admiral.

The rehab and relocation of tenants began when the Admiral’s 30-year Section 8 subsidy through the U.S. Department of Housing and Urban Development (HUD), expired in November 2008.

The original contract, one of thousands made with thousands of apartment complexes across the country during the 1970s and early 1980s, kept rents affordable for low-income people by being no higher than 30 percent of their income. The Admiral is one of 11 downtown apartment complexes with long-term Section 8 contracts that will expire by 2013.

The former owner, Mike Purcell, did not want to renew the contract with HUD. He had lost money the two previous years. He also wanted to keep the building affordable for low-income people.

One of those is Mike Mulvey. At 64 years of age and blind, Mulvey had no plans to move. He is one of the Admiral’s oldest tenants, having lived there for the past 23 years. 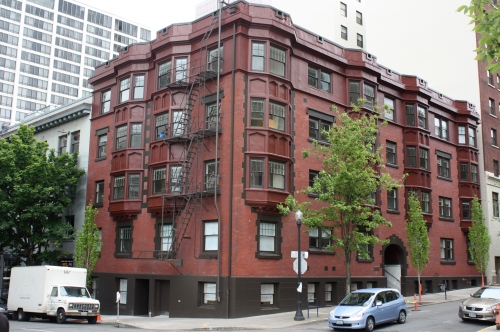 When he was informed in August 2008 that he would have to relocate, Mulvey says that while he was anxious about the relocation, he was also happy. His apartment had been infested with bed bugs, and he says that he would wake up each morning with 10 to 15 bites all over his arms. “It was hell,” he says.

In April, 2009, he moved to the Gretchen Kafoury Commons, an affordable housing complex operated by the Housing Authority of Portland. It was more expensive than the Admiral, and for the year that he was there, REACH subsidized the transitional housing by paying the additional amount that the Kafoury cost. Mulvey did not want to take the bed bugs with him, so he ended up replacing much of his furniture, including his bed, couch, and dresser.

Back at the Admiral, his new apartment is well appointed. NPR plays softly from a stereo tucked into a bookcase with boxes of CDs that are organized alphabetically. A black leather couch lines one wall, and two chairs are placed next to large windows facing SW Park Avenue. The kitchen is immaculately clean, with a coffee maker, coffee grinder, tea kettle, and toaster neatly kept in their places.

Though Mulvey has moved back into the Admiral, he has moved into a new apartment. The one he occupied previously faced an air shaft of a neighboring building. It was dark, and in comparison, his new apartment is “far more airy.” Although Mulvey is blind and has very little light perception, he says he gets a “real sense of strong energy” from the natural light of his new apartment.

“Light is more than just seeing it,” Mulvey says. “When it hits your skin, it makes you feel better.”

EACH purchased the Admiral from Purcell in November 2008, and managed the building while it assembled the $4.5 million dollar financing package to pay for its rehab. Funding, Sahli says, came from the state, City of Portland, and private lenders. The renewed Section 8 contract will ensure that all 37 units remains subsidized for 20 more years.

A rehab allowing tenants to continue living at the Admiral during construction was investigated, but found to be impossible given the amount of work that needed to be done.

REACH began arranging the relocation for all the tenants, and contracted with writer and housing advocate Martha Gies to find housing for 37 tenants while the Admiral was being rehabbed. Gies has helped relocate tenants of several buildings with expired HUD contracts, beginning with the Roosevelt Plaza in 1997.  She started work on the Admiral in the fall of 2008, and re-housed everyone before construction began in the spring of 2009.

“I began by interviewing each tenant,” Gies says, “to get a sense of where they preferred to live, whether or not they wanted to make the move back to the Admiral or whether they’d just as soon move once and call it good.”  The numbers were split down the middle. “But I admit I encouraged them to think seriously about the emotional and physical costs of two moves,” Gies says.

For those tenants who chose to move permanently, Gies had to find housing they could afford, and that meant nabbing one of the other scarce and valuable HUD units.  “Most preferred to stay downtown, and that narrowed the choices even further.”

For the other half, those who were certain they were coming back, REACH provided the private subsidies that permitted them to afford open market apartments.

In the process, however, some people ended up in assisted living facilities.  One made the unusual decision to move home to Italy to be with his elderly mother.  Five people, Sahli says, passed away.

“This group is really, really fragile,” Sahli says. “A lot of these folks probably shouldn’t have been living independently.”

By definition tenants who are eligible for the Admiral were people with very low or no incomes, elderly people, and people with disabilities. The tenants at the Admiral included two deaf tenants, several in wheelchairs, one Holocaust survivor, and two people who are blind, including Mulvey.

Sitting in a chair next to the window, Mulvey sits erect, with his hands in his lap. He wears big, black aviator sunglasses, and can pick up on the tiniest of sounds.

One sound he will miss from living at the Gretchen Kafoury Commons is that of I-405 at night. Mulvey, knowing that he would not be at living at the Gretchen Kafoury Commons for long, did change some habits to better fit with being in transition. He stopped smoking indoors so the smell would not stick to his new furniture or the apartment. He also did not use the kitchen, even though he loves to cook.

Mulvey had made some good friends during his time living at the Admiral, and he did not expect to form the same relationships at the Gretchen Kafoury Commons. “I did meet some really fine people,” he says.

One of those people, a fellow smoker, gave Mulvey his cigarette lighter as a going away present. Mulvey gets up from his chair to get the lighter, and making small steps, he bumps softly into the coffee table. He holds his hands out, and moves his way toward the desk. He begins opening the drawers of a small filing cabinet, and fishes around in one of them until he takes out an old, army green cigarette flip lighter with the words “U.S. Army” painted on it.

Even though he could have requested another Section 8 building where he might have stayed permanently, he wanted to come back to the Admiral.

“I knew this was home,” Mulvey says. “It took being away from it. I kept imaging being back here, and trying to remember all the little nooks and crannies.”

Mulvey already noticed after two days of being back at the Admiral that it had changed. There is linoleum where there was once carpet. The intercom system is going to take some getting used to. But the improvement Mulvey is most happy about is that all the doors are marked with Braille. That will make it easier for him to find his way to a friend’s apartment. But, he says, the Admiral still has what he likes most about the building. “It has a grandeur of age about it,” he says.

Mulvey learns the location and layout of a building through touch and remembering where something is in relation to other objects. One of the most difficult things about relocating, he says, was simply learning the layout of the building. He thinks it will take him a month to a month and a half to become completely oriented and comfortable in the Admiral again.

Mulvey reaches for a cane he keeps next to the doorway, and walks out the door. He feels for the right key, and barely has to move it around before he inserts the key and locks the door.

He moves the cane from side to side in broad strokes as he walks quickly down the hallway. “There’s this doorway that wasn’t here before,” he says at the end of the hallway. He barely bumps into the door frame, where there used to be a wider hallway.

“Now we just make a right turn” and Mulvey is at the beginning of the staircase going down to the second floor. He reaches his hand out for the railing, and practically jogs down the stairs, confident of each step’s location.

He opens the door and walks quickly down the outside steps and stands on the sidewalk, turning his head to follow the sounds of the street. With his hand touching the outside wall, he turns back around to go inside, and home.

2 responses to “Home Again: The Admiral welcomes back displaced residents”