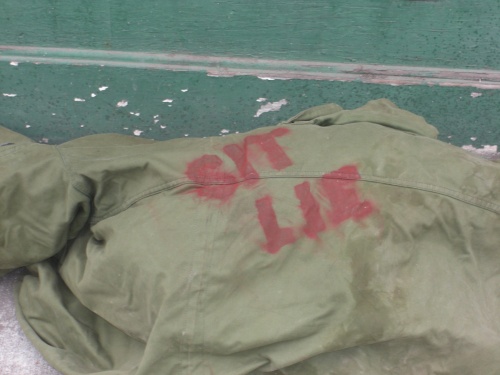 The ruling was issued June 19, and grants the motion to dismiss a sit-lie case being defended by attorney Clayton Lance.

“This ordinances has been found unconstitutional on three separate and distinct grounds,” Lance told Street Roots. “That’s a heck of a lot of unconstitutionality for one little ordinance out of the city. It just is not going to work and they just keep trying to make it fit, and it will never be able to fit, in my opinion.”

The sit-lie law prohibits sitting or lying on downtown sidewalks between the hours of 7 a.m. and 9 p.m. The city has said that it is to keep the sidewalks free of obstructions. Records show that the majority of people cited under the law are homeless.

Judge Bushong ruled that the city’s law conflicts with and is pre-empted by state law; State v. Robison, which Lance says already allows the city to penalize people for obstructing sidewalks.

As Lance noted, this is the latest round in the city’s failed attempts to institute a sit-lie law. In 2004, Multnomah County Circuit Court Judge Marilyn Litzenberger ruled that the city’s 2003 version of the ordinance was unconstitutionally vague and overbroad. The current version was a response to that ruling with more specific information on what was and was not prohibited. The Court of Appeals further ruled that the 2003 version was pre-empted by state law, the same as Bushong’s ruling.

“In the United States, we fundamentally respect the rights of individuals to meet, to assemble, to communicate and to use public property. And (the city’s) attempts at curtailing those fundamental rights have been unconstitutional every step of the way.”
It is presumed by many that the city will revise its ordinance for another round. Lance says he is ready to defend any charges under the ordinance for free.

In May, the City Council voted 4-1 to extend the ordinance until October, with the only dissenting voice on the council being Commissioner Randy Leonard.
City Commissioners Nick Fish and Amanda Fritz are currently leading a community process for input on the controversial ordinance.

Fritz told Street Roots she is reviewing the ruling and communicating with the City Attorney’s office before making a formal comment.

Fritz does say, “I am currently hoping our public meetings over the summer will go ahead as planned, as now more than ever we need to talk together to figure out solutions that work for everyone.”

“I never supported the sit-lie, because of its effect on some of our most vulnerable citizens,” says Leonard.  “I am happy the courts agree.”

“Everyone at City Hall is circling the wagons and trying to figure out next steps,” says Matt Grumm with Police Commissioner Dan Saltzman’s office. “People are aware of the decision and next week we will have a little more clarity.”

Asked if the police are currently enforcing the law after the ruling, Grumm says, “The commissioner has not asked the police to stop or discontinue with enforcement.”

The court’s ruling was welcome news at Sisters Of The Road, which has campaigned against the ordinance since its creation.

Seven years of sit-lie; A history of Portland’s sidewalk suits

Sept. 18: Street Roots, Sisters Of The Road and Dignity Village, along with more than 250 activists and individuals on the streets, converge on City Hall to protest the sit-lie enforcement guidelines.

2003
March 19: A group of about 15 anti-war activists camps on sidewalks in front of City Hall and across the street on Terry Schrunk Plaza, protesting the invasion of Iraq. Protesters call the demonstration the Portland Peace Encampment.

March 24: Street Roots and Sisters Of The Road launch the Right to Sleep campaign, urging City Hall to look at alternatives to criminalization, specifically the city’s anti-camping and sit-lie ordinances, which they say unfairly target individuals experiencing homelessness. Hundreds of activists and people experiencing homelessness converge on City Hall; Council Chambers are packed while speakers ask the city to suspend the ordinances.

March 26: Numbers of the Portland Peace Encampment begin to swell. Homeland Security informs the group that it can’t camp in the federally owned park or it’s members will be arrested. The Peace Camp moves to the city’s sidewalks, where the police begin to enforce the city’s sit-lie law. Individuals experiencing homelessness begin to join the action in front of City Hall.

April 14: Police sweep the Peace Camp, confiscating food, clothes, and protest signs. The camp stays. Within two weeks, the camp is swept again, and one person is arrested. Within a month, it is swept a third time, and three people are arrested.

Aug. 11: City Council changes the enforcement guidelines of the sit-lie ordinance. The new guidelines include the restrictions on picketers, and demonstrations and gatherings, without a permit, that last more than eight hours.

Aug. 13: The Peace Camp is roused early in the morning and told to move. Campers return and continue to protest the war on Iraq and the sit-lie law.

Aug. 15: Hundreds of people converge on City Hall in protest. Six people from the Peace Camp are arrested for violating the now-revised sit-lie law. The camp fizzles. Three of the arrestees, along with the newly created Northwest Constitutional Rights Center, will go on to challenge the ordinance.

Sept. 28: Street Roots organizes a three-day sit-lie festival to protest the city’s sidewalk laws on the grounds that they unfairly target homeless people. Two Street Roots writers are arrested for camping on public lands. The defendants plead not guilty. A judge dismisses the cases.

2005
December: A new 18-month pilot sit-lie ordinance is negotiated among people experiencing homelessness, advocates for the homeless, the business community, law enforcement and the city of Portland. During its 18-month tenure, only 19 tickets were issued, eight of which were thrown out of court. Of the 11 remaining cases, only one individual was found guilty.

2006
May 1: The business community requests a six-month extension of the sit-lie ordinance until a new ordinance can be drafted that will allow the police to use broader enforcement guidelines.

May 24: Mayor Potter presents City Council with the Street Access for Everyone (SAFE) Resolution, creating a workgroup to address street disorder and sidewalk nuisance problems. Twenty-four organizations representing homeless people, law enforcement, the business community and the city work during the next 12 months to develop the strategy. Between May 2006 and August 2007 the ordinance is not enforced.

Dec. 14: Street Roots comes out against SAFE’s newly proposed sit-lie ordinance that makes it illegal to sit or lie on a sidewalk from 7 a.m. to 9 p.m.

2007
January: The American Civil Liberties Union of Oregon, originally part of the 24 organizations that helped develop the SAFE committee recommendations, pulls its support of the ordinance. The ACLU says the ordinance goes too far in not allowing individuals to sit on stools or chairs, and by limiting protesters’ rights.

March 14: Street youths gather in Waterfront Park to protest the city’s sit-lie ordinance. The group marches to City Hall to deliver its concerns to Mayor Potter.

December: First reports from the Portland Police indicate that the vast majority of people cited under the sit-lie ordinance are people experiencing homelessness.

2008
April: Eight individuals experiencing homelessness camp out on the sidewalks of City Hall, protesting the city’s anti-camping and sit-lie ordinances. The individuals had recently been swept from under downtown bridges.

May 1: The group swells to about 140 people experiencing homelessness and demanding an end to the city’s anti-camping and sit-lie ordinances. Two weeks later, police sweep the camp in the early morning.

May 8: Sisters Of The Road ends its involvement with the Safe Access for Everyone (SAFE) oversight committee because of the committee’s refusal to consider repealing the sit-lie ordinance.

2009
May 6: City Council votes 4-1 to extend the sit-lie ordinance beyond its June sunset until Oct. 23, 2009. Commissioner Amanda Fritz proposes prolonging the term of the ordinance so that she and Commissioner Nick Fish could spearhead a community-wide discussion before deciding what to do with the law.