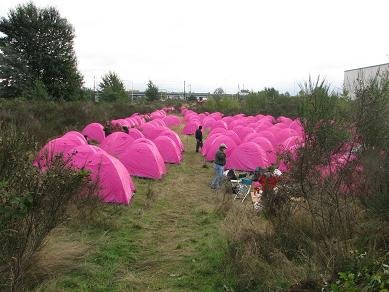 Nickelsville, the Seattle tent city that cropped up last year in protest of Mayor Greg Nickels’ policies on homelessness, will move to a permanent location on June 5, according to its organizers.

Though they haven’t announced what the new location will be, Nickelsville’s organizers say the new site will have ten times the capacity of the church lot they’ve stayed on for the last three months.

The cluster of 155 bright pink tents first formed in September in South Seattle. The tent city has moved several times as the city and state have evicted them from public lands.

Last week, the city dropped criminal tresspassing charges against 23 people who were arrested at Nickelsville in October. Read more on the Real Change blog.